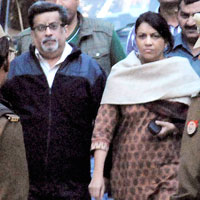 08 November, 2014
Print this article Font size -16+
An Indian court on Monday found a dentist couple guilty of murdering their 14-year-old daughter and a servant five years ago, in a dramatic finale to a case that transfixed the country and tapped unease on both sides of the rich-poor divide.

Aarushi Talwar was found with her throat slit at the family home in Noida, an affluent town of new shopping malls and offices near Delhi, in 2008. A day later, the body of the family servant, Hemraj, was discovered.

Rajesh and Nupur Talwar were convicted in a local court in Ghaziabad, near Noida, and remanded in custody ahead of sentencing on Tuesday, 26 November.

Naresh Yadav, a lawyer present in court, told reporters waiting outside that the couple and members of their family broke down in tears when the verdict was read out.

Early in the investigation, police alleged Rajesh had murdered his daughter and servant in a rage after finding them in a compromising situation - the kind of crime more often associated with rural, conservative parts of India where "honour killings" are not uncommon.

Both parents were later charged, but the Talwars always denied the murder and blamed sensational media coverage for demonising them and damaging their defence.

Much has been made in the media of the fact that the Central Bureau of Investigation (CBI), India's federal detective agency, relied on circumstantial evidence to pursue the Talwars.

"There were so many circumstances that proved that no one could have committed the murder other than the two accused," he said. "The court has convicted them after going through the chain of circumstantial evidence."

Rebecca John, one of the lawyers representing the Talwars, said they would appeal the ruling in a higher court.

"We are deeply disappointed, hurt and anguished for being convicted for a crime that we have not committed," the Talwars said in a statement. "We refuse to feel defeated and will continue to fight for justice."

Horrific crime stories are common in India and many involve caste or class.

But the Aarushi case, in which police named Hemraj as the murder suspect before his body was found, resonated with the rapidly expanding number of well-off families who fret that their wealth makes them vulnerable to violence.

Dipankar Gupta, a sociologist at Shiv Nadar University in Uttar Pradesh - the state where Noida is located - said the case highlighted how domestic staff were frequently abused by employers in India.

"But at least now there is some progress and people are talking about it," he said.

Newspapers this month reported the case of a wife of a member of parliament who allegedly tortured a maid to death at her home in Delhi.

Security footage last week of a machete attack on a bank employee withdrawing cash from an ATM in Bangalore to pay for her child's birthday party was played repeatedly on news channels. She was partly paralysed and the attacker is at large.