Mumbai (Maharashtra) [India], November 28 (ANI): For the first time, Bollywood stars Arshad Warsi and Akshay Kumar are coming together for the upcoming action-comedy titled 'Bachchan Pandey'.
Film critic and movie trade analyst Taran Adarsh announced the news of Warsi and Kumar's team-up on Twitter and said that the movie will hit the floors in January 2021 and will continue till March in Jaisalmer.
He tweeted, "AKSHAY KUMAR - ARSHAD WARSI... #AkshayKumar and #ArshadWarsi teamed for the first time for action-comedy #BachchanPandey... Costars #KritiSanon... Shoot begins Jan 2021 in #Jaisalmer... Will continue till March 2021... Directed by #FarhadSamji... Produced by #SajidNadiadwala." 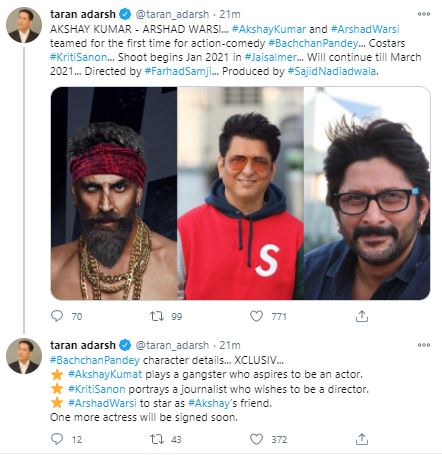 Sharing the exclusive details of the characters in 'Bachchan Pandey', Adarsh tweeted, "#BachchanPandey character details... XCLUSIV... #AkshayKumar plays a gangster who aspires to be an actor. #KritiSanon portrays a journalist who wishes to be a director. #ArshadWarsi to star as #Akshay's friend. One more actress will be signed soon."
Earlier, the 'Khiladi' star had earlier wrapped up shooting for 'Bell Bottom' in Scotland, following which he has resumed shooting for Yash Raj Films' period drama 'Prithviraj.'
'Bachchan Pandey' marks the superstar's 10th collaboration with friend and film producer Sajid Nadiadwala. (ANI)