Kerala/Tamil Nadu [India], December 3 (ANI): As Cyclone Burevi is expected to make landfall by Friday morning across the southern districts of Kerala and Tamil Nadu, the Armed Forces stationed at Trivandrum geared up and activated their assets to face the potential hazard.
Senior Officers from armed forces met the officials of the state government and analysed the situation, as per an official press release from the Kerala government.
To address contingencies, Pangode Military Station is ready with 12 columns of soldiers, each consists of 25 Army personnel. Moreover, Mi-17 and Sarang helicopters and AN-32 aircraft are placed at Sulur Air Force Station, Coimbatore to face any exigencies.
Coast Guard Station, Vizhinjam has deployed two ships and two boats. Southern Air Command Headquarters at Akkulam and Air Force Station at Shangumugom are fully prepared to face any situation.
Aircraft of the Indian Navy and Indian Coast Guard had their sorties off the coast of Thiruvananthapuram and Lakshadweep for overall surveillance and instructed the fishermen to go back to the shore immediately.
Earlier today, Union Home Minister Amit Shah spoke to Chief Ministers of Tamil Nadu and Kerala to ensure all possible support from the Centre ahead of cyclone Burevi.
Meanwhile, Rameswaram in Tamil Nadu received rainfall as a result of Cyclone Burevi which is expected to cross South Tamil Nadu coast between Pamban and Kanniyakumari during tonight and early tomorrow. An official appealed to people to shift to cyclone shelters. 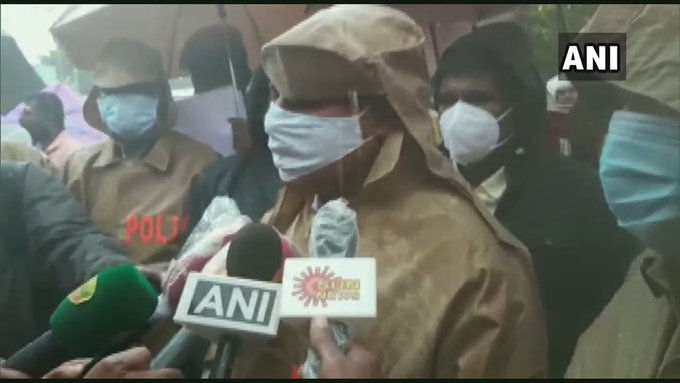 This afternoon, Cyclone Burevi edged further into the Indian peninsula as violent rainfall with strong winds was witnessed in the Kodaikanal area in the Dindigul district in Tamil Nadu.

As Burevi crossed the Rameshwaram coast, diving and disaster relief teams from the Indian Navy stood on standby to render necessary support to the administration.
Two fishermen and one fisherwoman from Pamban were rescued after being stranded due to the storm.

The wind speed has gradually decreased and it is currently blowing at a speed of 34 kmph. (ANI)