New Delhi [India], January 11 (ANI): Channelling his 'Monday Mood', Bollywood actor Arjun Kapoor treated fans to his stunning pictures in a blue ensemble.
The 'Ishaqzaade'actor posted a series of pictures on Instagram that featured him describing his 'Monday Blues'.
In the pictures, Kapoor looks dashing as he posed effortlessly for the lens in front of a blue backdrop. The 'Half Girlfriend' star is seen dressed in a round-neck white tee-shirt which he teamed up with dark blue over-jacket. With his spiky fringe hairstyle, the actor carried a well-trimmed beard and fully grown moustaches.
Kapoor completed his debonair avatar with stone studded pendant. He also changed his old display picture to the latest post. 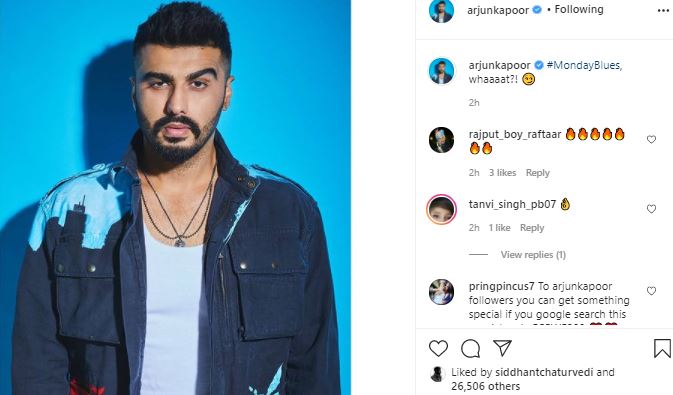 Keeping the caption short and simple, the 'Panipat' star noted, " #MondayBlues, whaaaat?!," with a smirking face emoticon.
The actor has been quite active on social media and has been updating fans on her activities by posting pictures and videos.
On Thursday, actor Arjun Kapoor shared a picture to announce that he has headed for shooting the final schedule of his upcoming horror-comedy 'Bhoot Police' that also stars Saif Ali Khan, Jacqueline Fernandez and Yami Gautam in lead roles. (ANI)