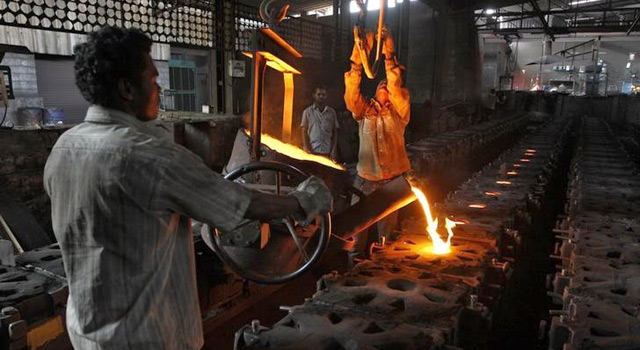 16 June, 2015
Print this article Font size -16+
Industrial production grew at a two-month high of 4.1 per cent in April, primarily driven by the manufacturing sector easing concern over an economy facing the worst drought since 2009. despite a slowdown in capital goods growth. However, May consumer inflation came in line with expectations at 5.01 per cent.
Output at factories, mines and utilities grew at an annual rate of 4.1 percent in April, the fastest pace since February. That was higher than March's 2.5 percent growth and the 1.6 percent economists forecast in a Reuters poll.
Economists are of the view that the positive surprise seen in the IIP data affirmed broad economic activity was on the mend while inflation appeared to be headed slightly higher after riding out a few months’ adjustment for base effects – in line with the Reserve Bank of India’s expectation.
The factory output, measured by the Index of Industrial Production (IIP), was 3.7 per cent in April 2014.
The industrial growth for March too has been revised upwards to 2.5 per cent from 2.1 per cent, as per the data released by the government today.
Manufacturing output, which constitutes over 75 per cent of the index, grew at higher rate of 5.1 per cent in April as against 3 per cent in the same month last year.
The production of capital goods, a barometer of demand, however, grew at a slower pace of 11.1 per cent in April as against 13.4 per cent in the same month last year.
In April this year, mining sector too grew at a slower rate. The growth was 0.6 per cent as against 1.7 per cent in April last year.
On the other hand, electricity production contracted by 0.5 per cent, while it had expanded by 11.9 per cent in the same month last year.
In terms of industries, 16 out of the 22 industry groups in the manufacturing sector have shown positive growth during April compared with the corresponding month previous year.
The industry group 'Machinery and equipment' has shown the highest positive growth of 20.6 per cent, followed by 16.2 per cent in 'wood and products of wood and cork except furniture', the data said.
On the other hand, the industry group 'office, accounting and computing machinery' has shown the highest negative growth of 36.5 per cent, followed by 34 per cent in 'radio, TV and communication equipment and apparatus' and 26.7 per cent in 'tobacco products'.
Separate data released on Friday showed that the consumer price index-based retail inflation quickened to 5.01 per cent in May from 4.87% in April, mainly on account of higher fuel prices. Fuel inflation was at 5.96 per cent. While vegetable prices rose 4.64 per cent, prices of pulses increased sharply by 16.62 per cent.
The Reserve Bank of India (RBI), in its monetary policy last week, had flagged the possibility of an increase in crude oil prices and the impact of a deficient monsoon on farm production as some of the risks to inflation projections.
RBI aims to contain retail inflation under 6 per cent as of January 2016.
Monsoon Worries
BPolicymakers are worried about the prospect of a second straight year of drought for the first time in nearly three decades after the country's weather office forecast below- average rains this summer. Monsoon rains in June-September are vital for half of India's farmland that lacks irrigation.
Some economists say a dry spell could reduce headline growth to as low as 7 per cent in the fiscal year 2015-16 from 7.3 per cent last year. That would fall short of the government's 8.1-8.5 per cent estimate.
New Delhi hopes higher public spending on roads, railways and ports this year will shield the economy from the impact of sub-par rains.
But less rain could push up food prices, straining household budgets and crimping non-food spending. It would also make it tougher for the Reserve Bank of India to cut lending rates further to juice up growth.
New Delhi says it has enough grain stockpiled to contain any food price shock. As a pre-emptive measure, it has extended duty concessions on lentil imports and is ready to provide high-yielding seeds for replanting of crops.
"On inflation side, likely insufficient monsoon remains an issue," said Sujan Hajra, chief economist at Anand Rathi. "We don't expect any (interest) rate cuts for the current year at least."
Tags assigned to this article:
inflation cpi top 2 iip manufacturing industrial production capital goods