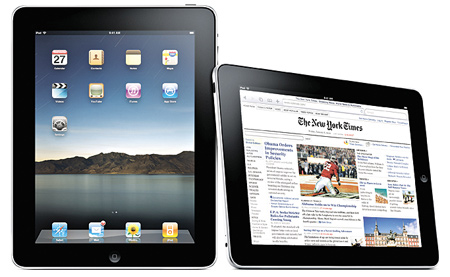 Apple on Wednesday launched iPad, its much-anticipated tablet touchscreen computer. While the company has announced US prices for the iPad — $499 (Rs 23,000) for a basic version with Wi-Fi wireless networking but no 3G connectivity, and $829 for a 3G version with 64 gigabytes of storage — it preferred not to disclose prices for markets outside the US for the time being (for a detailed review of the iPad’s strengths and weaknesses).

iPad can be a great device for Web browsing and ‘some’ personal computing, but it cannot be a substitute for a multi-purpose computer. Like the iPhone, the iPad cannot run Adobe’s Flash software, which is used by advertisers and gaming companies to create motion on Web pages. It does not have a built-in video camera or a USB port either.
Perhaps it is not meant to be. “It’s so much more intimate than a laptop, and it’s so much more capable than a smartphone,” said Steve Jobs while launching the iPad in San Francisco, US.
But, industry experts say, Apple has already launched a winner for the cloud computing era. The iPad will run on iPhone OS 3.2.
(This story was published in Businessworld Issue Dated 08-02-2010)
Tags assigned to this article:
magazine dhruv gogoi apple ipad steve jobs