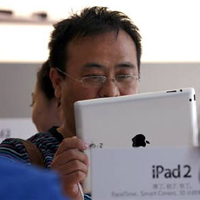 08 November, 2014
Print this article Font size -16+
Apple Inc delivered a second straight quarter of disappointing results and iPad sales fell well short of Wall Street's targets, marring its record of consistently blowing past investors' expectations. Shares in the world's most valuable technology company briefly dipped to levels not seen since the start of August, after it delivered a 27 per cent rise in revenue for its fourth quarter while earnings rose 24 per cent.

The numbers, while in line with expectations, lacked the positive surprises that investors had grown used to and came after Apple undershot revenue targets in the previous quarter. Its shares bounced back, however, after CEO Tim Cook told analysts on a conference call that the latest iPhone 5 was heavily backlogged but the company had mostly worked out kinks in its iPhone supply chain.

Apple shipped 26.9 million iPhones in the last quarter, somewhat higher than the 25 million to 26 million that Wall Street analysts had predicted. But sales of the iPad came in at 14 million, well below lowered forecasts for the tablet as the economy remained weak and consumers awaited the iPad mini, which will hit store shelves next month.

Analysts say the real test for the company will come during the crucial holiday shopping season, when competition will reach fever-pitch with Apple, Amazon.com, Google and Microsoft all fielding new gadgets.

"Going into earnings we were wondering if the slowing economy will catch up with Wall Street and it has," said Channing Smith, co-manager of the Capital Advisors Growth Fund.

"Apple is very well-positioned with the iPad and now the iPad mini. It has a great smartphone and we expect the iPhone 5 to sell very well. The outlook is conservative but that's not surprising. Err on the side of caution is a proven formula."

Just hours after Apple's results, its main smartphone rival Samsung Electronics Co reported a near doubling in quarterly earnings, and while it did not detail smartphone shipments, they are estimated to have surged to 58 million.

Apple heads into the current quarter after refreshing almost all of its product lines, including introducing an upgraded, fourth-generation full-sized iPad. The December quarter will show how well consumers respond to Apple's latest gamble — the iPad mini that will go on sale on November 2.

Car That Flies And Floats
For the December quarter, Apple forecast revenue of $52 billion, below the average estimate of $55 billion, according to Thomson Reuters I/B/E/S. It is expecting margins to come in at 36 per cent, far lower than analysts' expected 43 per cent.

Apple Chief Financial Officer Peter Oppenheimer mostly attributed the lower margin and conservative guidance to a combination of a stronger dollar, higher costs associated with new products, and the fact that Apple's next fiscal quarter has one less week than the same period a year ago.

Supply constraints holding up sales of the iPad and iPhone dominated discussions between analysts and Apple executives during the post-results conference call. Apple had struggled to deliver large quantities of the iPhone 5 since its launch in late September, with the waitlist for the device at one point stretching to three weeks in some regions.

"Our supply output is significantly higher than it was earlier in October," Cook said, referring to the iPhone 5. "And I'm confident that we'll be able to supply quite a few during the quarter."

Cook also opined on Microsoft's new Windows 8-based Surface tablet that will hit stores in the wee hours of Friday.

"I haven't personally played with the Surface yet, but what we're reading about it, is that it's a fairly compromised, confusing product," he said. "I suppose you could design a car that flies and floats, but I don't think it would do all of those things very well."

Despite the lackluster fourth quarter, Apple put up big numbers for the year. It ended its fiscal 2012 with a 45 per cent increase in revenue to $156.5 billion, while net income was up 61 per cent at $41.7 billion.

For the final fiscal quarter, it posted net income of $8.2 billion or $8.67 a diluted share in the fiscal fourth quarter on revenue of $35.96 billion, versus $6.6 billion or $7.05 a share a year earlier. Analysts had expected on average that Apple would earn $8.75 per share. Apple ended the quarter with $121.3 billion in cash and securities, of which $83 billion was offshore.