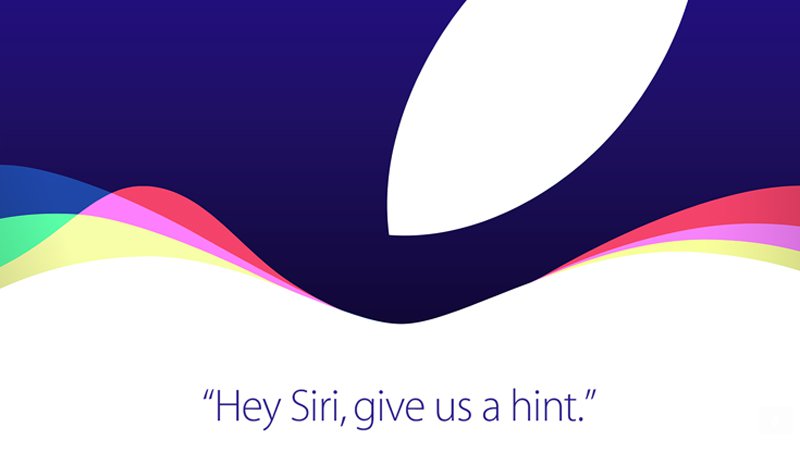 It’s that time of the year again when Apple will announce a brand new line of products as the company has officially sent out an invite for an event happening on the 9th of September in San Francisco. Apple usually has two events every year, one in summer where it announces its plans for its upcoming software updates and the second event happens in fall where it releases the new updates and also announces new updated products, including the highly popular iPhone.

This year the invite comes with the headline “Hey Siri, give us a hint” pointing out that Apple will be bringing new changes to its voice assistant, Siri. Of course there will be a bunch of other announcements, including the all new pair of iPhones. Surprisingly, unlike every year, the event will not only be live streamed for users of Apple products, but anyone using a Windows 10 PC will be able catch the event live.

Here are some of the expected announcements that Apple will be making at this year’s fall event.

iPhone 6S and 6S Plus

Last year we saw a design overhaul with Apple going big with its iPhone and also bringing a larger 5.5-inch model. This year, while the dimensions and design will be pretty much similar as the last year’s model, Apple will definitely bring in new upgrades with the iPhone 6S and the iPhones 6S Plus. According to speculations, the new iPhones will come the ‘Force Touch’ technology which has been used on the Apple Watch and the trackpad of the new super-thin Macbook. Force Touch senses the level of force exerted on a display surface, and responds accordingly. The software that manages the Force Touch feature can, for example, seek a video on the screen if the user presses harder than a light tap, which would just play or pause the video. Rumours also say that Apple will be upgrading the camera and this year will see the new iPhones with a 12MP camera along with 4K video recording (Finally).

Apple will also bring in a brand new update for is iOS devices which was first announced at WWDC on the 8th of June. iOS 9 is claimed to be a more intelligent OS and will be bringing a variety of features like intelligent search and improved functions with Siri, performance improvements and bug fixes, split-screen multitasking for iPad, new updates apps with better optimization and usability, battery improvements and many more. The update itself will be smaller this time with iOS 9 requiring only 1.3 GB of space to install, compared to the 4.58 GB of space required by iOS 8.

We haven’t seen a new iPad for some time now and if rumours turn out to be true, Apple will bring in a new iPad with a 12-inch 2,732x2,048display with force touch and possibly a stylus as well. There is also a chance that there could be more than one iPad that will be announced.

While a lot of Apple fans loved the affordable iPhone 5C, it seems that Apple might bring in a successor and might even keep the same display size. The iPhone 6C could be a reality in just a few days featuring a 4-inch display, and all the new updates of the iPhone 6S at an affordable price tag. Glossy plastic anyone?

It is expected that a new version of the Apple TV will also be announced with the biggest change being how one controls it. There could be a new remote with a touchpad and microphone or even be motion sensitive like the controller of the Nintendo Wii. This is also an indication that Apple could bring in casual games to the platform and create the Apple TV into an affordable gaming console.