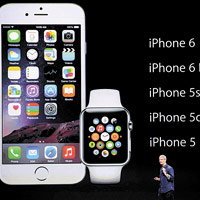 08 November, 2014
Print this article Font size -16+
Apple unveiled a watch, two iPhones and a mobile payments service as chief executive officer Tim Cook sought to revive the technology company’s reputation as a wellspring of innovation. The first new product to be developed and introduced under Cook’s reign is the timepiece, tethered to the iPhone, that will combine health and fitness tracking with communications. It will go on sale in early 2015. The cheapest iteration of the phone, the iPhone 6, starts at $199 with a contract and can go all the way up to $1,000 for higher-end versions, said IDC analyst Danielle Levitas. As for the new digital payment service, Apple Pay, it will let users buy merchandise simply by waving the new iPhone or Apple Watch in front of a reader.

Trust Deficit
Walt Disney, DreamWorks Animation and other film production firms were sued in an antitrust case that may reflect a new wave of litigation applying traditional price-fixing claims to labour markets. A recent lawsuit accusing the California-based companies of colluding to not hire each other’s software engineers, digital artists and animators comes as Apple, Google, Intel and Adobe Systems are trying to resolve similar claims after failing to win court approval of a proposed $324.5-million settlement with 64,000 of technical workers.

Let The Games Begin
Microsoft, maker of the Xbox videogame console, plans to buy Mojang, the software firm behind the popular game Minecraft, for around $2 billion, people with knowledge of the matter said. Microsoft is in serious talks with four-year-old Mojang, they said. An accord to acquire Mojang would be the biggest deal struck since Satya Nadella took over as Microsoft’s chief executive officer in February, succeeding Steve Ballmer. Nadella is shifting the company’s focus more toward Internet-based services and cloud computing.

Oily Mess
Oil giant BP was “grossly negligent” in the 2010 Deepwater Horizon disaster, a federal judge ruled, handing down a decision that could cost the company as much as $18 billion in pollution fines for the Gulf of Mexico oil

spill. Judge Carl Barbier of the US District Court of Louisiana also apportioned blame for the spill, with “reckless” BP getting two-thirds of it. He said the other two main defendants in more than 3,000 lawsuits filed in the spill’s wake, Transocean and Halliburton, were found to be “negligent”. Transocean got 30 per cent of the blame and Halliburton 3 per cent of it.

Bad Bet
Trump Entertainment Resorts, which runs two casinos in Atlantic City, filed for bankruptcy protection for a third time, in another blow to the city’s crumbling casino industry. Four of the 12 casinos in the city have closed this year. About 8,300 jobs have been cut so far. Trump Entertainment, which Donald Trump founded but no longer controls, operates the Trump Taj Mahal Casino Resort and the Trump Plaza Hotel and Casino in Atlantic City, the second-largest US gambling destination after Las Vegas. Like much of Atlantic City, the two Trump properties have suffered from a decline in gambling revenues and falling occupancy in hotel rooms.

New Twist
US retailer Dollar General is preparing to go hostile in its bid to buy rival Family Dollar Stores, taking its $9.1 billion offer directly to shareholders after being spurned twice by its smaller rival, people familiar with the matter said. Dollar General will launch a tender offer for Family Dollar. The latter, which already has a deal to sell Dollar Tree for $8.5 billion, has rejected Dollar General’s unsolicited approaches citing antitrust risks. Representatives for Dollar General and Family Dollar both declined to comment.

Under Scanner
In a bid to understand what separates a social network from a messaging application, European Union (EU) anti-trust officials have sent a detailed questionnaire to the competitors as well as customers of Facebook and WhatsApp. The move is part of the EU’s formal review of the $19-billion acquisition of the popular mobile messaging service WhatsApp by the social network earlier this year. Europe’s telecom industry argues that “over-the-top” operators such as WhatsApp use telecom companies’ infrastructure but are not taxed or regulated in the same way. Some European politicians have expressed concern at the way US technology companies have come to dominate Europe’s digital economy.

Street Smart
British luxury carmaker Jaguar launched its cheapest ever car, the first new model in a range designed to widen its appeal to women and younger drivers and take on bigger rivals such as BMW, Audi and Mercedes-Benz. After years in the doldrums, Jaguar has enjoyed a new lease of life since it was bought by the Tata Group in 2008, along with British automaker Land Rover. Jaguar said the XE sports sedan, to be priced at £27,000 in Britain, will be the first model in the XE series. A sport utility vehicle is expected to follow. It is seeking to challenge a luxury car market long dominated by German cars such as the BMW 3 series, priced from £23,550 in Britain, as well as Audi and Mercedes-Benz models.

Rich Pickings
Alibaba Group, the e-commerce firm, plans a historic US initial public offering (IPO) that might set a global record. Alibaba is seeking a valuation of $162.7 billion, larger than 95 per cent of the S&P’s 500 index, as it enters the final stages of the IPO. At the high end of the proposed price range, Alibaba will be the third-most valuable internet firm traded in the US after Google and Facebook. The offering will raise around $21.1 billion, according to a regulatory filing.

Bigger, Better
Dubai will spend $32 billion on expanding the Al Maktoum International Airport at Dubai World Central, making it the world’s largest airport and increasing its ultimate capacity by 25 per cent to more than 200 million passengers a year when it is complete. This will allow Dubai’s fast-growing flagship carrier Emirates and other international airlines to shift operations to the new facility by the mid-2020s.