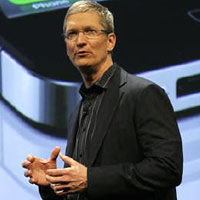 08 November, 2014
Print this article Font size -16+
Apple Inc has applied for a trademark for "iWatch" in Japan, a patent official said on Monday, signalling the iPhone maker may be moving ahead with plans for a watch-like device as gadget makers turn their attention to wearable computers.

The trademark application, submitted on 3 June and released on the Japan Patent Office website on 27 June, would cover computers, computer peripherals and wristwatches, the official said. He said it was unknown how long the application process would require. An Apple spokesman in Japan could not immediately be reached for comment.

Speculation has mounted that Apple is preparing to launch an iWatch and CEO Tim Cook told a gathering of tech and media executives a month ago that wearable products were ripe for exploration, but added he was sceptical, including about Google Inc's recently unveiled Glass which combines a mobile computer and eyeglasses.

"There's nothing that's going to convince a kid who has never worn glasses or a band or a watch to wear one, or at least I haven't seen it," Cook said.

Also Read: Back In Fashion by Mala Bhargava

Wearable devices are considered a potential area for hit products as smartphones such as the iPhone and Samsung Electronics Co's Galaxy series are losing their ability to impress consumers and investors.

Samsung, which has leapfrogged Apple as the world's leading smartphone maker, is also developing a wearable device similar to a wristwatch, a source with knowledge of the matter has said.

The New York Times reported in February that Apple was experimenting with the design of a device similar to a wristwatch that would operate on the same iOS platform as its iPhone and iPad and would be made with curved glass.