Anupam Kher gives clarification over viral photo, says 'it is not me'

Anupam Kher gives clarification over viral photo, says 'it is not me'

New Delhi [India], February 22 (ANI): Veteran Bollywood actor Anupam Kher on Monday shared a social media post, giving clarification over a viral photo.
The 'Saaransh' actor took to his Instagram handle and shared an old monochromatic picture of a young boy, who closely resembled him, posing for the camera with his mother beside him.
Clarifying the confusion, Anupam wrote, "Story of this pic; This beautiful pic going viral on social media is that of my mother and my brother #Raju. It is not me. Every small city, especially a hill station used to have a famous photo studio. In Shimla, it was Roshan studios. Families once in a few months used to take pictures together and these pictures used to get displayed on the walls of our homes. This is one such pic."
He continued, "I have no idea how my brother sneaked a solo picture with Dulari. But it is beautiful. Don't you agree? #DulariRocks #Memories #Trivia #BlackAndWhite #Mother #Brother @rajukherofficial"
In the picture, Anupam's mother and brother can be seen smiling at the camera while wearing traditional Indian outfits. 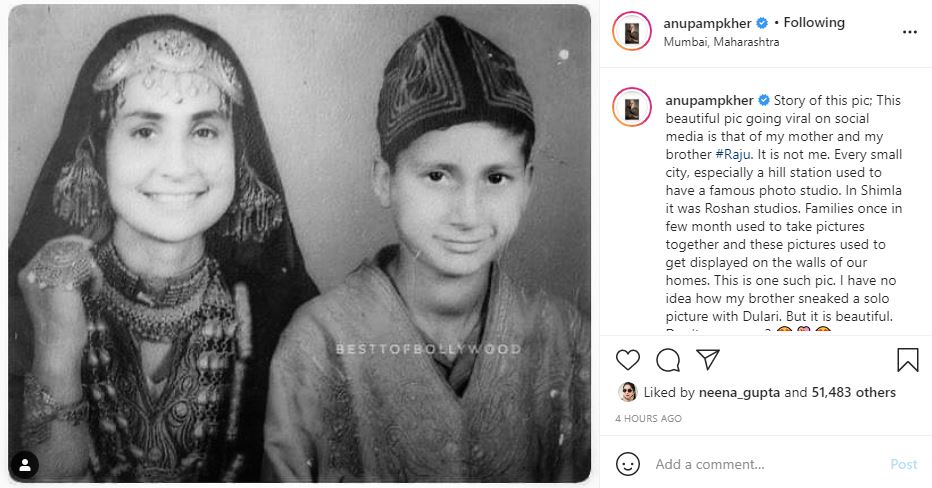 Meanwhile, on the work front, the 65-year-old actor will soon be seen sharing screen space once again with Aahana Kumra for the upcoming short film titled 'Happy Birthday'. This film will mark the duo's 2nd collaboration after the 2019 critically-acclaimed movie 'The Accidental Prime Minister'. Directed by Prasad Kadam, the short film will be produced by FNP Media.
Apart from 'Happy Birthday', Anupam has several projects in the pipeline including 'The Last Show', 'Mungilal Rocks', and 'The Kashmir Files'. (ANI)