Rajasthan [India], January 31 (ANI): Bollywood actor Anil Kapoor who has been working his fingers to the bone for his upcoming family drama 'Jug Jugg Jeeyo' is all set to shoot for the final schedule of the movie in Udaipur on Sunday.
Proclaimed as 'forever young' star, Kapoor hopped on to his social media accounts to give a sneak peek into his workout sessions while gearing up for the last shoot schedule of his upcoming romantic family drama flick 'Jug Jugg Jeeyo' that also features veteran actor Neetu Singh, Indian actors Kiara Advani and Varun Dhawan.
In the snaps shared by the 64-year old star, he is seen showcasing his bulged up biceps while working out in a dark grey sports tee and black patrol cap that also shows off his grey side-whiskers. Alongside the picture, he wrote, "Sunday Gun day. Location: Udaipur for the last leg of our shoot in Rajasthan!" using flexed biceps emoticon in the caption. 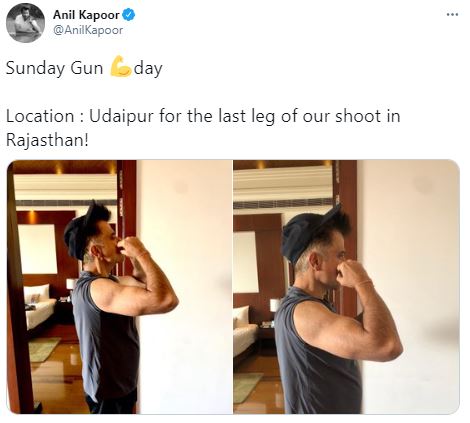 Of the late, the 'Mr. India' actor, being an active celebrity on social media is often seen sharing pictures from his fitness regime.
Earlier, he shared a few snaps where he was seen posing on the Elephant Hill in Narlai, Rajasthan captioning the picture as, "Had a great shoot day in Rajasthan... Feeling on top of the world..."
Fans and celebrity followers started pouring love and appreciating the star for his look in the comments section of the post by leaving fire and red heart emoticons.
Directed by Raj Mehta and produced by Hiroo Yash Johar, Karan Johar, and Apoorva Mehta, the romantic-drama that stars Anil Kapoor, Neetu Kapoor, Varun Dhawan, and Kiara Advani in the lead roles, alongside YouTuber Prajakta Koli and TV show host Manish Paul went on floors in Chandigarh in December last year. (ANI)