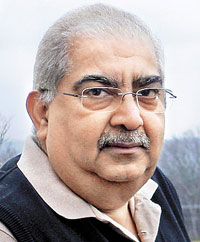 08 November, 2014
Print this article Font size -16+
In late 1990s, when I accepted the role of managing director for Unocal India, it was a mandatory requirement for all individuals serving in global senior leadership roles to be instructed and certified by a reputed US law firm on the Foreign Corrupt Practices Act (FCPA). Every year one had to take a refresher course and recertify that was one fully trained and aware of the statutes, and also affirm that one did not violate the law. It was with part amusement and part serious consideration that one learnt the subtleties of what is a ‘bribe’ and what is ‘lube’. We were taught that presenting a life-saving medication or assistance to a government official to his or his family’s lives was deemed as bribe whereas perhaps a small payment to expedite the release of machinery at a sea port or to get your passport stamped at a Nigerian airport was considered as lube. (Not that the lesser was pardonable; the American manager was culpable all the same.)

As I read through the case, I relive some of my past experiences with conflicts when dealing with governments across the world. Business could not be done in countries in South-east Asia at that time because every contract required an agency agreement that provided a remuneration to a member of the ruling monarchy or party; and this process had FCPA breach written all over it. Similarly, others had warned that capital investments in India would require similar agency agreements with enablers and agents. In that context there used to be guidance that partnering with Indian companies was mandatory since Indian companies had their ways of handling approvals with the government. Indian companies in return asked for annuity interest in projects that did not require a capital outlay other than the monies they had to pay for the required approval process. One could possibly argue if this was appropriate or not as per the FCPA statutes.

In this case, Elzy India decided not to partner with an Indian firm and instead pursue its interests directly by hiring Effort Little, which  proceeded as instructed (by Sahil Wazir) to create the desired outcome at any cost, and billed back that cost to Elzy. This clearly shows the lack of good judgement and due diligence on Elzy’s part for not clearly engaging Effort in a description of the itemised costs when there is so much wrong doing in real estate. I contend that Elzy is accountable for poor judgement notwithstanding the perceived naivety that can be debatable.

On the aspect of doing business with India, India does need to relook at its procedures and processes to create more transparency. How this will happen and what would it take to institute this transformation, one cannot say. The problem of payoffs to get work done exists at all levels. One has heard of utility line men come to the house looking for a baksheesh (tip) for ‘fixing’ the meters to enable lower telephone bills. If one did not subscribe to this behaviour, the meter read in error, generating exorbitant bills! There is no formal escalation process to remedy these practices. This is not what real India wants! This is so because the real Indian was unable to speak up. But the time has come for change.

The Economist had once published an article listing the most corrupt countries to do business in. Sadly, India was right up there. There is wide trepidation in the US regarding doing business in countries where approvals come with a FCPA price tag. I had been engaged with two US firms that looked for energy investments in India that were heavily dependent on government approvals. Both companies eventually had to ultimately withdraw because of the difficulties in getting the right approvals to conduct business and due to the constant revisit of agreements that were already in place. There were several other energy companies that were unable to set up business in India for similar reasons. Energy is a vital source for industry and for daily living, and ultimately India was deprived of energy due to the inability of the US companies reaching appropriate agreements to set up their business.

Having been in the US for over 33 years, I can unequivocally state that US companies operate under a very strict code of ethics and conduct to the extent that most firms do not allow a corporate gift of more than $25. I have run into situations where we have invited folks for a user’s conference and they have refused a free hotel room and stayed at their company expense to avoid any bias when making informed decisions. It is this clarity of propriety over impropriety that lies behind the American capability, so that even in recessionary times, the heart does not seek value-less business conduct.

As a final reflection, India desperately needs to infuse full transparency in the decisions to award contracts and negotiate terms and conditions as per published standards to attract and retain foreign investment. The time for change is now and I am confident that India is ready and willing to move forward.

The author, a graduate of IIT-Kanpur & Carnegie Mellon University, is managing director of CSC India, a fully-owned subsidiary of CSC