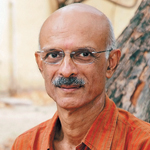 Society demands High character! of its teachers, soldiers and leaders. A protector of the nation is supposed to be one who is proud of his nation and one who represents the nation's spirit in his actions. School on the other hand, is the cradle where children learn the basics of integrity, decency and fairness. They also learn sensitivity and how to use the thinking process. This forms a bedrock for the future.

The gurukula made it possible to think of a man above human failings and to put the children in its his care. It was hoped that the children, students would see the epitome of human behaviour and absorb the same. Today school is a collective, of teachers, students and parents. Human beings who work in schools have failings like all people. The army or any other institution or a profession is no exception - whether a doctor, nurse, accountant, manager, engineer, army officer, police officer, diplomat, film star or a professor. If we ask the following simple questions and think of the professionals mentioned above, we will note interesting responses in ourselves.

The last decades of 20th century show an acceptance of things that were simply not acceptable a few decades ago. Live-in relationships, consensual sex are accepted in the melting pot of our cities. We have dilemmas, if at all, in this area only when it comes to our own children and families, brothers or sisters. The media portrayals of life have drawn attention to these questions in various ways, some times not very responsibly.

It is true that social reprisals are heavy - in the 21st century people have been hunted and killed for marrying a person of another caste, talking to a girl. Banishment, punishment, rank denial, exclusion diminish a person. I agree that problems that occur or a change of decision needs to be reported. We need a basis for conduct. But are things black or white? Should our institutions take extreme positions and on what issues?

The Brigadier's says that ‘civilian-like'  behaviour is a danger to national defense. Are not human beings subject to same forces of emotion and thinking irrespective of where they work or what roles they hold? We all know that a person can and does fail. Poor judgement is not prerogative of any one group. We also know that our behaviour patterns have deep roots.

Large organizations depend on a shared purpose, and people need to feel proud or convinced of the mission and methods employed. The gaze of history is tough and exerts a pressure. The age of information also makes defining arguments accessible to all.

Digital answers such as the Brigadiers suggests will leave none standing. All unacceptable things would go underground - torture by American soldiers in Iraq, till one fine day it blows out of the cupboard. Or the Enrons and Satyams or Union Carbides.

Human society is making a rickety and jerky journey to life long learning. It does not matter where one is or how old and what rank and designation he/she posses, one has to be in learning. Organisations are recognising this and the training man-days per employee give a number to this intention. The change from mere performance to performance + learning is a leap.

However, in the work spaces, is there room for learning and growing, not just in skills but in other ways as well? Judgement and action flow from our inner conversations, often unconscious. Is there a recognition of these judgements and actions and a concern about values and their clarification for the individuals? Human beings are often caught in a time warp - practices and processes we were bred on have become objects of  embarassment. What we hold in our blood and bones comes out under stress - and careful review, post mortem show how fallible we are.

The paradox of a learning individual, a learning organization is that as individuals grow in thinking and perception, they can exert uncomfortable pressures on the organisation and its core purpose. Organisations will need to redefine their approach and sometimes even abandon their historical business or practices. Cigarettes is a classic example. Environment unfriendly practices are another. War machinery continues to be good business. America can't be without the right to carry guns. Multinational drug companies sell drugs banned in the West to Bangladesh, Africa and India.

Organisations need to see that the ‘being' and the ‘becoming' are not that far apart? Investing in being means, deep concern that people understand themselves, and thus possibly understand their own limitations, and discover inner movement and new ways of relating.

Thinking and understanding oneself may create basic questions. E.g. is having an army better than a good relationship with neighbors? Does preparing for war, not invite war?

G.Gautama is an engineer by training and an educator by choice. As Director of The Chennai Education Centre of Krishnamurti Foundation India, he oversees The School KFI, Pathashaala residential school and the Outreach activities of the centre.