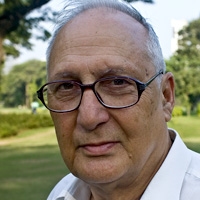 Both 'the absolute' and 'the relative' defend their positions, out of the need for survival. The absolute imagines chaos if not persevered, the relative escapes becoming 'social dinosaurs'.

The armoury of the absolute is values, the armoury of the relative is accommodation. Both use their armoury to wage an unnecessary battle, unnecessary because the battle they wage is not the real one. The real battle is between what I have learnt and lived v/s what I have let go, yet value. One side sees the future with the eyes of the past, the other is constantly at the cusp of change, and so the truth of yesterday converts to the predicament of tomorrow. If this is correct, then the battle is not a tug-of-war but a passing of the baton in a marathon relay.

The evidence for evolution post Charles Darwin is now overwhelming, and much of the evidence is found in fossils. Hence the admiration for the retired senior is as natural as the wish to save the erring junior from harsh punishment, lest a valuable element of the specie is lost to natural section.

The case is silent on what the lady officer felt, or for that matter the other officers at the party. Hence the context is highly selective, and therefore limited. Perhaps to bring focus?

Would harsh discipline resolve the issue and re–instate ‘Fauj' values as expressed? Or, are these values being altered by the nature of society from which the ‘Fauj' is drawn? The example of another officer departing from pre–briefed procedures and processes, highlights "the top knows best" at a time when in every walk of institutional living, individual initiative is being expected and encouraged. Are the risk of doing so, greater or lesser than the risks of blind adherence to authority in the name of discipline, albeit for national safety?

Then again, has national safety been compromised by the ever increasing breaches in discipline as expressed by the retired senior? We need to be careful not to hang our self–esteem on to labels that purport to support a bigger cause for which there is a little evidence i.e. as the nations honour being at stake.

And yet there is a genuine sense of anguish in seeing cherished values under – mined by changing mores. This anguish has great value as the cauldron from which social behaviour emerges from which standards are set; the thesis gives birth to the anti–thesis, and then a new synthesis. For such is social geometry.

All absolutes are but relatives, seen differently.

At another level, the case is about choice. We know what we are going in for, and we know the discipline extraordinary  expected. So often, we fail to be ourselves. And such failures or fissures or aberrations, open cracks in us towards a new and unbridled humanity, and/or to a loss of self and purpose. Any discipline which humiliates an individual, humiliates the society imposing it.

And yet, in another sense, it is also about luck and being found out. "Bad luck, old chap"! But when luck holds out, the façade we build, is the façade that holds. "Woe becometh the man who knoweth not how to wear his mask - Pirandello."

Finally, I must ask myself what would I do were I the senior of the erring officer? Perhaps, call him and ask him if he can live with himself and the expectations he had of himself when he enlisted. Based on his answer I would take my decision.