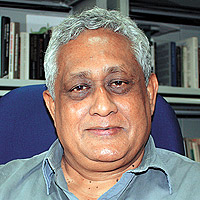 The key event is that news as constructed today demands attention. It is not news that people object to, but the way it constructs the idea of India. There is confusion between the idea of India and the nature of being Indian.

Oddly, news is seen as real but not representative of the average Indian. News on television is bad news about the Indian. News creates a venal India, while the average Indian seeks to define himself as mobile, clean, normative and successful. Here the Indian seems more preoccupied with identity and image rather than the fact of politics. It is a tragedy of democracy when advertising seems more attractive than reportage.
News is caught in a double bind. Unless it is disruptive or sensational, it is not seen as news. Yet bad news alienates. It is seen as too sociological, pathological and unrepresentative. It lacks the intelligence, laughter, humour and even grace that the average middle-class Indian seeks to identify with.

What is really interesting is the way the rhetoric of news is constructed. Both news and advertising face the synecdochal challenge. Advertising creates a part that gives a sense of the whole. News offers a slice of life reflective of the whole. It is the psychological contrast that constitutes the power of the argument.

Advertising creates an ideal, normative picture, which facilitates identification. News disrupts and alienates the average Indian. A wish list appears truer than an assortment of facts.Interestingly, advertising combines myth and everyday events; news combines history and journalism. The first absorbs contradictions. The second widens them. Yet, one must be sensitive to the rhetoric of construction.

News is portrayed as phenotypical, advertising as genotypical. News is aggregated from simple elements. Advertising presents the essence of the whole. Yet the language of the argument is constructed in terms of the rhetoric of advertisement. If one had constructed the same as a sociological analysis playing out ideas and interests, it is advertisements that would sound hollow.

There is an interesting polarity. Advertising is normative for it reaches for the ought. News is real, therefore, it creates anxiety. Advertising recognises the need for fantasy. News blud- geons and it is prone to hysteria. So, paradoxically, ads sound real and news hyperbolic.
The psychological flaws make for the real difference. News as repetition forces alienation, advertising as gentle redundancy is reassuring. News is what you look at and skip. Denial is not at the level of fact but identity.

The mnemonic values are different. Advertising is memorable. News demands attention but necessitates erasure. Advertising as myth can be repeated. News as history seems redundant. Proportion provides a key to the logic of acceptance. But it is like comparing apples and oranges.
There is an interesting play of fact versus truth, objectivity versus subjectivity. News is homogenous and hyperbolic. Its psychological substrate is weak because the real sounds unreal. News as fact does not speak the truth of India, at least ideologically, while advertising understands the root of Indianness. The hyperbolic nature of news renders it subjective, while the reassuring nature of advertising appears more objective.

Eventually, it becomes a choice of two myths. One which creates miniature sets of paradise and the other proclaims the fall of man. But here lies the confusion. One says life can be better, other insists it is getting worse. Advertisements see the ideal as real and deny the real as fact. News claims to be real but the redundancy of the real is alienating and, therefore, seen as untrue. It is this tragedy of slippages that makes the analysis both lethal and fascinating.

It has a sense of two theologies of the Old and the New Testament, anchored on two psychologies, all in all a clever sense of differences in the rhetoric and content of presentation. There is, however, little sense of empirical sociology, but a shrewd sense of rhetoric and psychology.
The narrative begins as a doubt that becomes self-reinforcing. A different framework beyond audience response might have yielded different conclusions.

Shiv Visvanathan is a social scientist, and teaches at Dhirubhai Ambani Institute of Information and Communication Technology, Ahmedabad