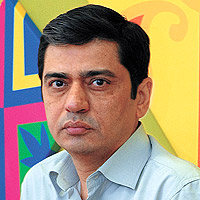 What is most interesting about this discussion is that it seems so reasonable. It seems perfectly legitimate to ask if this is indeed the picture of India that we want to see and perhaps, more importantly, wish the rest of the world to see, why can't, as Pragati asks, news tell the consumer what he wants to hear?

And yet, what is in effect being argued is that it is not information about the world that resides ‘out there' that is of primary importance, but the feeling it generates ‘in here' — in our hearts and minds. According to this view of the world, everything must conspire to make us feel good — about ourselves, our country, our glowing complexion and our lack of body odour.

By this yardstick, news fails when it makes us feel bad and advertising succeeds because it shows us a soft focus-version of how life ought to be. As paying consumers, we have a right to feel good, and it is insensitive for some news channels to come and ruin the party.
The analysis is simplistic on several counts. First, the characterisation of news as essentially bad and of advertising as essentially positive, is flawed. Of course, advertising does show us a highly romanticised view of our lives, but it does much more. It is a testament of desire, an honest account of who we are, what we dream about and what we secretly fear and loathe. And in the same way that Hindi cinema speaks to something very real with something very contrived, advertising, too, is as honest in its understanding of human motivations as it is manipulative in speaking to it.

As a narrative, it is infantile in its construction, speaking to the child in us who still believes that he or she is at the centre of the universe. It is a staged theatre where even grown men and women hold up packets of detergent to the camera and attribute life-saving properties to it.
Advertising uses material from real life, but the story it tell us is far from being real.

It is also part of a larger system that converts our identity from something that is fixed and stable into one that is perpetually incomplete and forever in danger of slipping away from us. We buy things not because we ‘really' need them, but because they reflect who we are or wish to be. This involves both the positive affirmation of our existing way of life as well as the active fostering of dissatisfaction with ourselves. Just as ads show us the shiny happy world of our dreams, they also tell us how undesirable we are, how incomplete and how unspeakably pimpled. It magnifies all that is imperfect about us and gives us external benchmarks of evaluation, yardsticks that become ever more stringent. Ads contain both palliatives for our egos as well as  violence for our souls.

On the other hand, while news does tend to accord greater significance to what goes wrong rather than what is being done right, it is too simplistic to think of news as a pure product, detached from its consumers and doing its unpleasant duty even if it means being relentlessly negative. Bad news sells, just as good news sells, and we have seen examples in the past few years of how both get packaged and sold. The India Shining story was told breathlessly by the same news outlets that bring us scams today; at that time many stories were selectively framed to ensure that we heard only the good news.

If anything, what we are seeing is a blurring of the distinction between news and advertising; both are already engaged in speaking to the consumers. If advertising tells us what we want to hear about ourselves, news increasingly does the same about the world outside. Both give us good news and bad, in different ways. Increasingly, what unites them is more important than what separates them.

The really interesting aspect of this case is the ease with which we have redefined the real and the false. In Navneet's eyes, for instance, ads and India's World Cup victory are examples of the real, while scams and scandals are part of the world that is false. In a consumerist world, everything becomes a symbol, an intermediate sign that points elsewhere. The very idea of real is subverted; things exist because there is a constituency for them. Scandals connect with the aggravated sense of injured innocence of the middle class, and make them feel all righteous and angry and this sells just as well as does advertising. Same difference.

Santosh Desai is managing director and CEO of Future Brands, a part of the Future Group