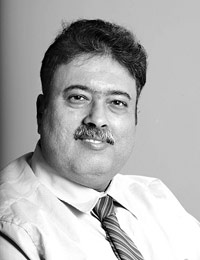 08 November, 2014
Print this article Font size -16+
Raghav saw his friend acquire a car by taking a loan. He felt that if his friend could do so, it should be possible for him too. After all, who does not want to progress and prosper in life? Raghav thought a car would also help him in his livelihood as a tailor, since it would become easier to carry the cut pieces of cloth, and deliver the tailored readymade garments.
But Raghav did not consider his earning capacity, or unforeseen circumstances. Blinded by the thought of owning a car, he took the plunge.
After having spent nearly Rs 3 lakh for the car, what does he have, after his car was seized for default in payment? Nothing but misery, tears, and a sense of emptiness and frustration. Raghav’s prayers are not going to solve his problem.
He failed to act with prudence, dazzled by his friend’s progress in life and the glib talk of the finance company’s representative. He did not weigh all the pros and cons before deciding to avail of a loan. When he was asked to sign the agreement and other papers for the loan without even reading them or being provided with a copy, he did not want to do so. He could have refused to sign. But that would mean no loan, and his dream of getting a car would be dashed. So, he acted impulsively and signed the documents, which would make him the proud owner of a car — a possession which lasted exactly 17 months!
Whenever someone wants you to sign something blindly or does not want to give you a copy of what you are executing, your antennae must go up. There has to be some catch. Never sign documents without reading their contents and understanding their implications. The most disastrous tendency is to avoid the “botheration” of reading the fine print, and instead depending on the salesman’s explanation, because it is the fine print that must be read carefully.
When a standard contract framed by a service provider contains contradictory or conflicting clauses, or is ambiguous such that it can be interpreted in different ways, the doctrine of “contra preferentum” will apply. It simply means that when an agreement can be interpreted in different ways, the court would accept the interpretation that favours or benefits the consumer, considering the fact that the consumer does not have equal bargaining power to negotiate the terms of the contract, and accepts whatever conditions are unilaterally imposed on him. In Raghav’s case, the agreement with Ambara contained two conflicting clauses: one which permitted him to pay the EMI along with interest for delayed payment, and another which vested the company with the discretion to recall the loan in case of default. The principles of natural justice require the borrower to be put to notice and given an opportunity to pay up the outstanding amount. Yet, Ambara did not follow this procedure and took the law into its own hands. Ambara felt that no action would be taken against it. Why? First, Raghav was not an educated man who would know his rights. Second, a man who defaulted in paying the EMI would not be able to afford legal fees and costly litigation against a financial giant. Third, before even sanctioning the loan, Ambara had obtained from an unknowing and unsuspecting Raghav a signed a declaration that he was surrendering his vehicle due to inability to repay the loan.
When Raghav didn’t have a car, the only problem he had was of commuting. But after his car was seized, he lost not only the car, but the money he had spent to acquire it. Worse, he lost his cloth pieces, and with it, his customers’ faith, and his reputation. As a result, he stopped getting orders, and lost his source of livelihood. Even though he was fortunate to get people to fight his consumer case without charging any fees, he had to incur the expenses involved in filing the case. It is said that experience is the best teacher. This experience has made Raghav wiser and more mature, but it has been the costliest lesson of his life, and he is paying for it even today!
The author is a consumer activist who has received the Government of India’s National Youth Award for Consumer Protection
(This story was published in BW | Businessworld Issue Dated 22-04-2013)
Tags assigned to this article:
magazine business case study analysis loans jehangir gai magazine 22 april 2013