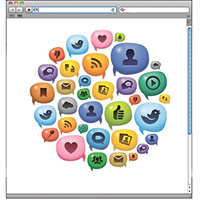 08 November, 2014
Print this article Font size -16+
If you want to keep abreast of information on specific people, brands and issues, mention is just the tool for you. There is Google Alerts, of course, but mention is just so much more. It is an information-monitoring tool that not only scans key words that you are interested in on the Web, but also trawls the various social media platforms for them — Google Alerts is restricted to Web and news references.

At a time when most conversations are happening on the social media, mention goes beyond just tracking conversations — it allows users to participate in them. Its iPhone and Android apps permit users to tweet, post, follow and email ‘mentions’. For marketers who need to keep track of what is being said about their brands/companies and plan quick responses, it can be a particularly effective tool.

The application also has a ‘priority inbox’ that allows users to see what people with influence are saying. The influencers — widely followed bloggers, Twitter users, websites and newsmakers — are marked with a red flag. And, users can create a filter to see only ‘priority mentions’. Mention also has a paid version designed for businesses, which includes data analysis.  It categorises keyword references by source, language, a select period of time and, also, as positive, negative, or neutral, providing specific inputs concerning the perception of a brand, company, etc.

Though it is quite a leap when compared with Google Alerts, one cannot help but mention that competition in IT does not take long to catch up.

BRAND BUZZ
A Perfect Match
LinkedIn has bought job matching service Bright for $120 million. It is the network’s biggest acquisition till date — it had acquired mobile news reading app Pulse for $90 million in 2013. Bright leverages data insights and technology to connect prospects and employers. The acquisition is expected to be completed by the end of the first quarter of 2014, subsequent to which, several members of Bright’s team, including those from engineering and products, will join the social network.

Raiding The Net
As much as 60 per cent of the traffic on the Internet is generated by bots that can distribute malware, steal data and swipe passwords, states Web security company Incapsula

Way Ahead
Engagement, per user, on Facebook is seven times greater than on Twitter — smartphone and personal computers combined,  according to Web portal Business Insider