New Delhi [India], February 5 (ANI): Going down memory lane, Bollywood megastar Amitabh Bachchan on Friday wished his actor-son Abhishek Bachchan on his 45th birthday by sharing a then and now picture featuring him with Junior Bachchan.
The 78-year-old actor took to Instagram and celebrated his son's special day by uploading a then and now picture with him and captioned it, "I lead him once holding his hand .. he leads me now holding my hand."
The post from the '102 Not Out' actor is a collage of two pictures. One side shows him holding a young Abhishek's hand and leading him while the other picture shows an older Abhishek doing the same for the veteran actor.

Abhishek also got an adorable wish from his niece, Navya Naveli Nanda. Taking to her Instagram account, Navya shared a throwback selfie from a football game with Abhishek.
Sharing the photo, Navya wrote a heartfelt note for her uncle. She captioned the post, "Happy birthday best friend to more NYC nights & Chelsea games. You may just be my favourite family member My partner in all crimes!" 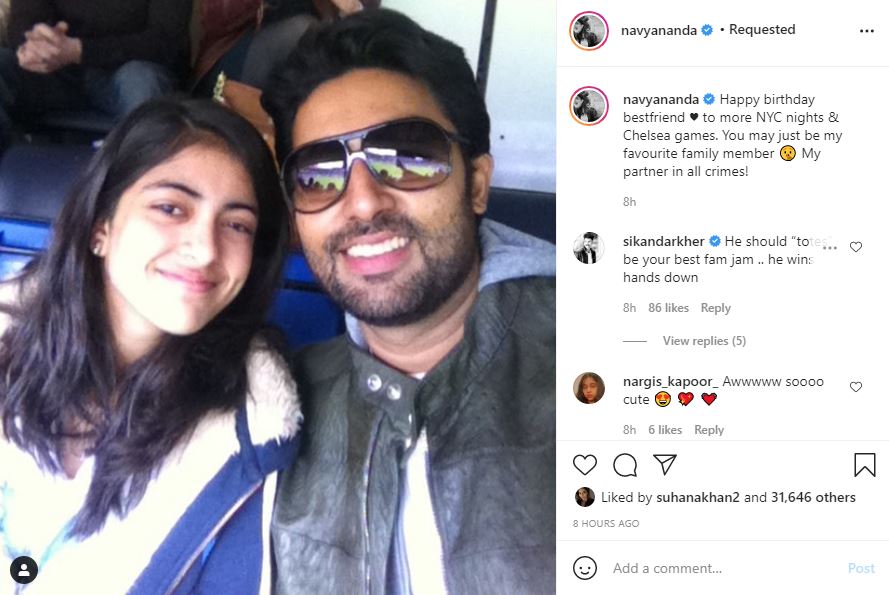 Meanwhile, Big B, who recently celebrated sixteen years of his blockbuster film 'Black', was last seen in 'Gulabo Sitabo'. He has an impressive line-up of films in the pipeline including Rumi Jaffery-directed 'Chehre', Ayan Mukerji's superhero movie 'Brahmastra', and Nagraj Manjule's sports film 'Jhund'.
On the other hand, Abhishek was last seen in Anurag Basu's Netflix movie 'Ludo' and has 'The Big Bull' in the pipeline. (ANI)