Almost As Good As Gold 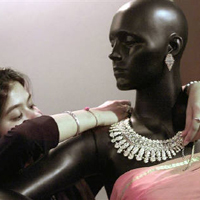 08 November, 2014
Print this article Font size -16+
The luxury jewellery market has a new favourite, and it’s not gold, it’s silver.

Many leading jewellery companies are unveiling new lines in silver at upcoming fashion shows. For one thing, analysts say, gold has become too expensive; sales are uncertain. Silver is a precious metal too, and rising prices have made it a little more precious, but still affordable.

The tough global economy has cut into the wealth of the rich — though not the richest; the Forbes  400 richest Americans have seen their wealth go up by 13 per cent to about $1.7 trillion between September 2011 and August 2012. Media reports cite Tiffany & Co. as saying that its customers are cautious about buying gold jewellery, but have no problems buying silver accessories.

Some retailers — Tiffany & Co. among them — are getting creative, adding traces of gold and copper to silver, creating a mix called Rubedo. But others believe that gold will be back as the precious metal of choice for jewellery. Because ultimately, nothing is as good as gold.