All Kinds Of Unlikely Facts 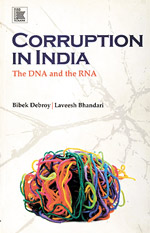 08 November, 2014
Print this article Font size -16+
This brief study, titled Corruption in India (Konark), tries to summarise and catalogue what is known about corruption. The DNA and RNA (in the subtitle) refer to petty and large-scale corruption. Large-scale corruption is often exposed; scandal makes good news, and news media jump on stories of corruption, investigate them, sensationalise them, and spin them out. The study, authored by Bibek Debroy and Laveesh Bhandari, gives a long list of big scandals that have made news since Independence. Small-scale corruption, on the other hand, is ignored. The book takes off from a series of reports in the newspaper, Prabhat Khabar, but covers a larger canvas. It does not embody new research; but it has unearthed all kinds of unlikely facts.

The study goes into corruption in the large-scale programmes the government runs for the poor — the public distribution scheme, MGNREGA and Indira Awas Yojana. Then it goes into corruption in public works, auctions and tenders; this chapter relies largely on data collected by Prabhat Khabar in Jharkhand. The next chapter describes corruption faced by rickshaw pullers, truckers, exporters and fertiliser producers; in all these cases, government servants turn a regulatory function into an extortionary one. Then the study looks at the police and the judiciary, and notes the large differences in corruption across the states. Gujarat has long been known to have good governance; but Bihar has emerged as the next best run state. The last chapter lists the government initiatives for reducing corruption. The book ends without a cure-all recommendation or even a set of suggestions, which, perhaps, was a wise course to follow.