All In The Family 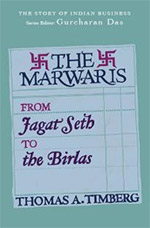 08 November, 2014
Print this article Font size -16+
Indian businesses, especially those owned by traditional business communities like the Marwaris, are typically family firms, they are frequently organized in the form of ‘business groups’, and the families that own them are frequently members of business communities. These institutional forms and their evolution were seen as reasons for Marwari success in the early period, and for relative failure later.

Some of these family firms have achieved longevity. We are informed that the Birlas are now in their seventh generation as a large business group, and the Rockefellers and Fords have had a significant presence in the American economy over a similar span. An article reveals a list of firms founded before 1800; the oldest is a temple construction firm in Kyoto dating back to 578 ce. The list features a number of familiar names with interests in vineyards, construction and banking, including the Japanese Kikkoman Soy Sauce Company which goes back to 1630. This list of firms is obviously incomplete; it misses out several old Indian firms going back to the seventeenth and eighteenth centuries.

There is even an association of firms going back to before 1800 ce known as the Henokiens (after Henok or Enoch, a name coming from the Bible), which has a number of European and some Japanese members and an active website, www.henokien.org. The comparable British Tercentenarian Club does not have a website but is active. The relative presence and importance of family firms in the Indian private sector is high, and their persistence, as family firms, high as well. The secretary of Lipovitch Henokiens indicated to me that the association would very much like to have Indian members.

There is a group of originally German Jewish family firms (Greek and Armenian ones as well) which were key factors in international trade and finance for decades. There is an interesting story about how some of these have fared over the last several turbulent decades in financial markets. The British historian Cecil Roth argued in his book on the Sassoons that their commercial continuity was enabled by their adhering to ethnic traditions. It is for this reason that the descendants of those branches of the Warburg and Rothschild families that survive as commercial entities have remained Jewish. Many of the other leading Jewish banking families converted to Christianity and no longer have independent commercial presence (for example, the Bleichroeders, Schröders, Mendelssohns, Itzigs, etc.).

However, the fate of European international banks is a complex topic which calls for a book of its own. Literature exists on these primarily Jewish bankers to German rulers and how they became key funders of international trade in the nineteenth century. Literature also exists on how their descendants assimilated into the general international upper class. The British have a saying that ‘the coach rarely passes the church door for three generations’. Many successful British businessmen were Quakers and other types of dissenters and ‘passed’ the door of the official Anglican Church to go to their own chapels or meeting houses. A remarkable number of their descendants joined the Church of England.

What it means for a family firm to ‘exist’ is a complex question in pre-corporate economies. The firm and the family are identical. The family may have been in business for generations. And all families, it is asserted, go back equally far—to the beginnings of mankind.

Whether family firms are a good thing and whether they are successful is a more controversial topic. A flood of literature establishes that founder-run firms are most efficient. The situation with family firms otherwise is more murky. In general, the literature in the US and some Asian countries suggests that they are less successful than professionally managed firms. Data from Europe and perhaps elsewhere suggests the reverse.

Allan R. Cohen wrote a classic but now hard-to-find book in 1974, Tradition, Change and Conflict in Indian Family Business, which was based on eight Harvard Business School case studies on Indian family firms, at least three of which appear to be Marwari. He came to the not surprising conclusion that where the business firm and the family structure represented and accepted the same family hierarchy (senior/junior) it worked, and where there were conflicts, it did not. These case studies also documented the extent of the conflicts. Some would say that they occurred more, and probably so, because of contemporary social changes in Indian society as a whole. But these kinds of conflicts between family and business necessities have been endemic in the Indian family and family firms from time immemorial, though undoubtedly the social sanctions for the family hierarchy itself have weakened in present times.