All About The Look 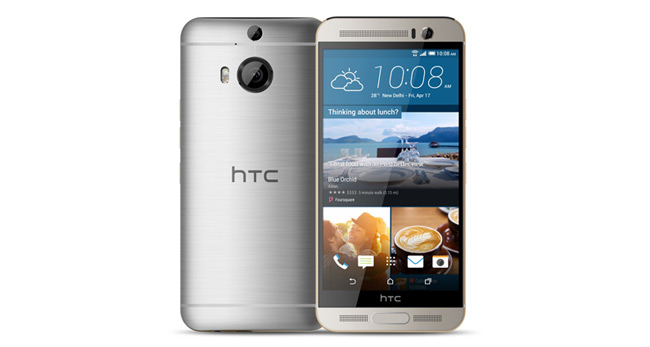 09 June, 2015
Print this article Font size -16+
HTC is well known for making some of the best looking Android smartphones. The original One (M7) and One (M8) received a lot of appreciation in the past for their exquisite uni-body metal design, but since the past few months the company has not been doing good business.
The company announced the all new One M9, an update to the One M8, at Mobile World Congress in Barcelona this year along with some variants including the One M9+ and the One E9+. To much surprise, the company never brought the flagship device to India but announced its larger sibling, the One M9+. This was probably due to the fact that M9+ offers a larger 5.2-inch display with a finer 2K (2560x1440) resolution, a different processor and a fingerprint scanner as well.
Now the M9+ has the same design as the original flagship with a full metal body and a brushed aluminum finish which certainly looks premium. While it is still a uni-body design, it has a new two-tone colour finish including gunmetal gray, silver gold and amber gold options. The power button has been moved along with the volume keys all of which have been redesigned as individual units on the right edge. The display with its high-end resolution offers a great experience as it is sharp and produces great colours. The fingerprint scanner on the M9+ is just like the one seen on the iPhone 6/6 Plus and the Samsung Galaxy S6 as it is placed right under the display splitting the BoomSound equipped loudspeaker into two. The scanner is responsive and smooth and also acts as alternative to the on-screen home key apart from letting you unlock your device.
The biggest difference however is at the core, while the One M9 runs on the latest Snapdragon 810 processor, the M9+ runs on a 2.2GHz 64-bit octa-core MediaTek processor. This is the first time HTC has used a MediaTek chip for a high end smartphone. Other hardware features include 3GB of RAM and 32GB of expandable storage, a 20MP rear camera which is backed up by a 2.1MP secondary lens for re-focusing and a dual-tone flash just like last year’s One M8. The front camera has a 4MP resolution to click your selfies.
The handset runs on the latest Android Lollipop version with the company’s latest Sense 7 UI layer on top. The new UI is quite similar to the last version but now focuses more personlisation features as it brings in themes and options to change your icons, fonts and so on. The new feature certainly spruces up the whole experience on the device. Daily tasks are buttery smooth and all the apps run without any issues. Stressing the device does lead to heating and since it is a metal based device, you do get to experience that at some point or the other. Battery life is very standard as you get a day of backup of normal usage and heavy usage leads to about half a day.

HTC flagship devices have been criticised in the past for not having the best camera quality even after having some innovative features. With the One M9+, HTC has used the same duo-lens arrangement with 20MP camera sensor along with a secondary lens with 2.1MP resolution. Most of the features and modes have been pulled out from the last year’s One M8 and just like Sony and Samsung smartphones, the camera app gives options to download more modes. While the camera app does run smooth and taking pictures is very quick, somehow the quality of the pictures is not very impressive. There is loss in details and colors seem washed out on some occasions. The re-focusing feature works well but pictures taken in this mode are of lower resolution, however there is an option to shoot at the full 20MP resolution, but that means compromising on the refocus feature.
The One M9+ is a bit of a mixed bag and yet again, HTC doesn’t give anything unique to convince you to buy the smartphone.  While it does offer a premium design, there is nothing else that sets it apart from the competition. At this price a better option would be the Samsung Galaxy S6.
Tags assigned to this article:
more 4 gadgets htc kunal khullar one (m7) one (m8)