New Delhi [India], January 31 (ANI): Bollywood actor Alia Bhatt, who had arrived in the national capital to spend time with rumoured beau Ranbir Kapoor, met his sister Riddhima Kapoor Sahni on Sunday.
Alia, who has been making headlines for her much-awaited projects in the pipeline, fled to Delhi where Ranbir has been reportedly shooting for his next untitled flick with director Luv Ranjan.
A day after Alia's arrival in the national capital, Ranbir's sister Riddhima, who stays in the same city, took to Instagram and shared a picture of herself posing with Ranbir and Alia. The picture also features Riddhima's husband Bharat Sahni and their daughter Samara Sahni.
Along with the happy family picture, she wrote, "Hello fam" with a white heart emoticon. 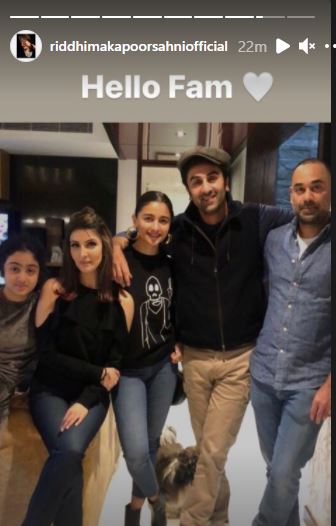 Meanwhile, on the work front, Alia and Ranbir will be sharing the same screen space for the first time in Ayan Mukherji's directorial 'Brahmastra' that also features megastar Amitabh Bachchan.
Apart from 'Brahmastra', Alia also has Sanjay Leela Bhansali's period film 'Gangubai Kathiawadi' and SS Rajamouli's magnum opus 'RRR' in the pipeline.
On the other hand, Ranbir, who was last seen in Bollywood actor Sanjay Dutt's biopic titled 'Sanju', will be featuring in Karan Malhotra's directorial 'Shamshera'. He will also star in 'Animal', being helmed by Sandeep Reddy Vanga. (ANI)