Akshay Kumar wishes Sajid Nadiadwala on birthday, thanks him for 'literally paying his bills'

Akshay Kumar wishes Sajid Nadiadwala on birthday, thanks him for 'literally paying his bills'

Mumbai (Maharashtra) [India], February 18 (ANI): Bollywood megastar Akshay Kumar on Thursday penned down a quirky wish for his friend and film producer Sajid Nadiadwala on the occasion of his 55th birthday.
The 'Mission Mangal' star took to Twitter and shared a throwback picture with the birthday boy from the sets of 'Housefull 4'. The picture sees a bald Akshay dressed in a traditional ensemble posing alongside Nadiadwala. 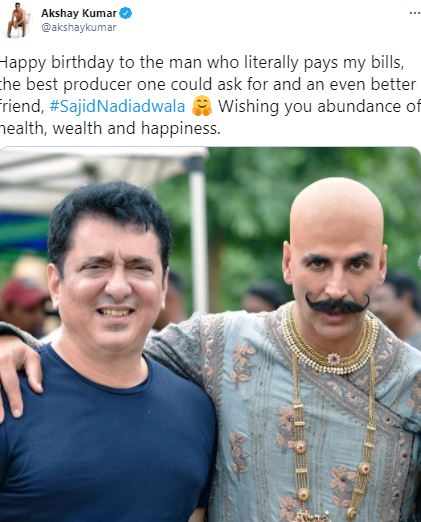 Sharing that the producer 'literally pays his bills,' the 'Namaste London' star extended birthday wishes while calling him an 'even better friend'.
Akshay tweeted, "Happy birthday to the man who literally pays my bills, the best producer one could ask for and an even better friend, #SajidNadiadwala. Wishing you abundance of health, wealth and happiness."
The actor has done multiple projects with the renowned producer, and the duo even has uncanny similarities. Both went to the same school. They also linked up with one another earlier on in their careers with Akshay doing 'Waqt Hamara Hai' with him. Akshay and Sajid, both married in the same year, in 2000.
Meanwhile, on the work front, Akshay was last seen in the 2020 film 'Laxmii', co-starring Kiara Advani. The actor has a flurry of projects in his kitty including 'Atrangi Re', 'Raksha Bandhan', 'Bachchan Pandey', 'Sooryavanshi', 'Bell Bottom', and 'Prithviraj' and 'Mission Lion'. (ANI)