Mumbai (Maharashtra) [India], January 10 (ANI): By sharing an intriguing clip from his epic historical drama, Bollywood actor Ajay Devgn on Sunday commemorated one year landmark of 'Tanhaji: The Unsung Warrior' and celebrated the 'brave warrior Tanhaji again'.
The 'Ishq' star hopped took to Twitter and shared a clip from the film which featured energetic song 'Ghamand Kar' and also the introductory dialogue of the lead character essayed by Devgn.
Chronicling some memorable scenes from the movie that featured the star cast of 'Tanhaji', the clip featured- Kajol, Saif Ali Khan, Sharad Kelkar and Luke Kenny. 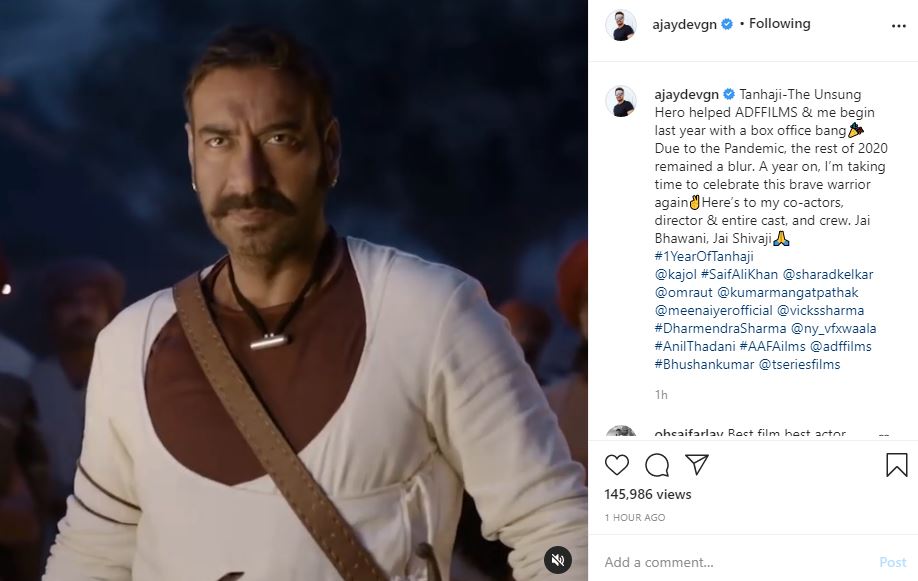 Celebrating the memories associated with the film as the movie clocked 1 year, Devgn noted, "Tanhaji-The Unsung Hero helped ADFFILMS & me begin last year with a box office bang."
"Due to the Pandemic, the rest of 2020 remained a blur. A year on, I'm taking time to celebrate this brave warrior again. Here's to my co-actors, director & entire cast, and crew. Jai Bhawani, Jai Shivaji #1YearOfTanhaji."
Kajol who essayed the role of Tanhaji's companion in the movie also celebrated one year of the film by sharing the same clip. "The longest year ever ...#1YearOfTanhaji!," wrote the 'Kuch Kuch Hota Hai' star in the caption. 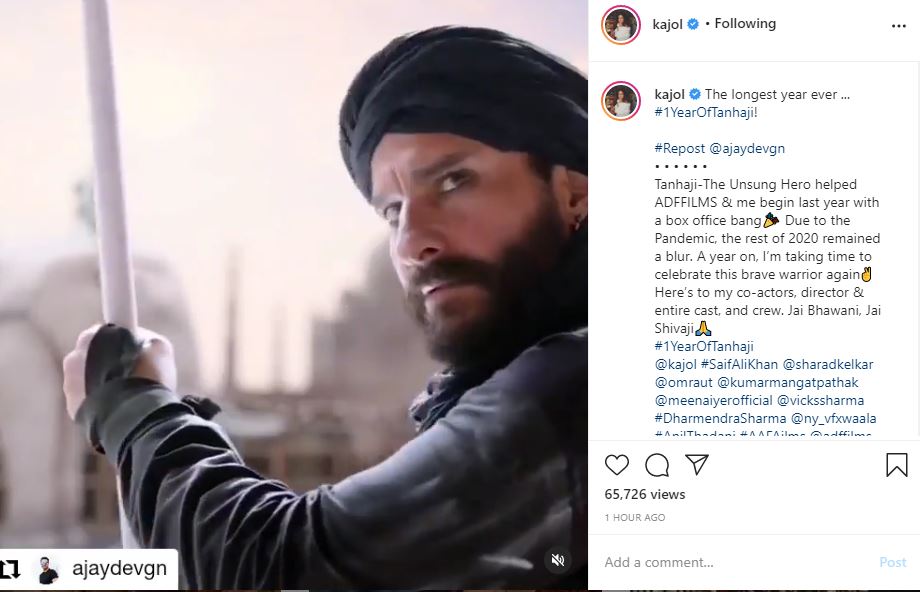 'Tanhaji: The Unsung Warrior' shows Ajay Devgn essaying the role of Maratha warrior Taanaji Malusare fighting for the principle of 'Bhagwa' (saffron) flag and 'Swaraj' (home-rule) and 'Satya' (truth).
Kajol, who essays the role of the wife of Tanhaji -- Savitribai Malusare -- is shown as a strong character, who accompanies him in taking firm decisions.
Saif Ali Khan, who plays the antagonist, comes out strong as Uday Bhan, a Rajput official, who works for Mughal Emperor Aurangzeb.
The film is produced by Ajay Devgn's ADF and Bhushan Kumar's T-Series and has been directed by Om Raut. (ANI)