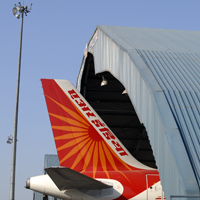 08 November, 2014
Print this article Font size -16+
A series of cost cutting measures and an aggressive marketing strategy have led Air India to generate cash surplus of Rs 460 crore in April-June on the back of a consistent growth trend since last July.

The all-round improvement resulted from a strategy that encompassed a review of Air India's fleet and network, pricing, schedules and revenue management, airline sources said.

With the turnaround plan (TAP) in operation, the national carrier had gradually reduced its running cash loss from Rs 512 crore in October-December 2011 and Rs 432 crore in January-March 2012 to just Rs 37 crore in April-June 2012.

The airline started making a surplus over its variable costs since July-September last year when its surplus was Rs 51 crore. It jumped to Rs 312 crore in October-December, Rs 361 crore in January-March this year and Rs 460 crore during April-June, official data showed.

"For the past 18 months, Air India's financials have shown a consistent quarter-over-quarter improvement, including a distinct jump in its financial performance in the first quarter of this financial year," a source said.

Air India's domestic occupancy has also been on the upswing since September-October last year vis-a-vis its key competitor Jet Airways and other airlines.

Its seat factor, or average seat occupancy per flight, has been hovering between 70-80 per cent since last October and crossing the 80 per cent mark on at least four occasions, the figures showed.

Regarding right-sizing of its fleet, they said the airline has practically completely withdrawn its Boeing 747 Jumbos and was in the process of replacing its B-777 Long Range aircraft with the B-787 Dreamliners, the sources said.

As many as 14 Airbus A-320s were reconfigured into all- economy class with 168 seats, they said, adding that this move was taken to effectively compete with the no-frill carriers.

Several measures have also been taken towards better pricing and revenue management, including a market-driven and responsive pricing policy, an automated revenue management structure and supporting tools and 30 or 60 days advance purchase fares, the sources said.

While a new call centre has been opened this January, Air India has started getting a growing number of users on various social media platforms like the Facebook, they said.