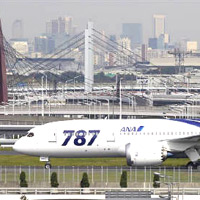 08 November, 2014
Print this article Font size -16+
Air India Ltd diverted a Boeing Co 787 plane to Kuala Lumpur after pilots noticed a software glitch during a flight from Melbourne to New Delhi on Wednesday (5 February), in the latest incident involving the jet.

Engineers flew from Hong Kong to fix the glitch, a spokesman for state-run Air India said, adding the plane with 215 passengers on board was due to take off for New Delhi on Thursday (6 February) afternoon.

"It was not a major snag. But passengers were on board so we could not take a chance," the Air India spokesman said. He said Air India was awaiting a detailed report from the engineers on what caused the glitch.

Boeing said it was aware of the incident and was working with Air India to provide support.

The 787 has suffered a series of glitches since its launch two years ago. Overheating batteries in some planes forced the grounding of its worldwide fleet last year. Flights resumed in April 2013.

A Dreamliner operated by Air India last month returned to London after a transponder failure.

Boeing is upgrading software in older Air India Dreamliner jets. The plane diverted to Kuala Lumpur is yet to get a software upgrade, the Air India spokesman said.