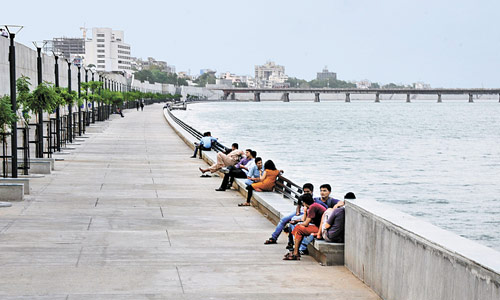 It is a breathtaking 360-degree view of Ahmedabad from the city’s revolving restaurant, Patang, which overlooks the majestic Sabarmati river and its recently cleaned white sand riverfront.

It has been a few months since riverfront encroachments and slums were removed to create a 300-mt-wide ‘beach’. High bunds are being built to keep the river in check. The city’s master plan envisages a promenade and bund running all the way to the airport, nearly 7 km away.

Founded in 1411 by Sultan Ahmed Shah as the capital of the Gujarat sultanate, the city became the region’s trading hub and later a textile town. By 1985, textile mills, like in Mumbai, began giving way to realty development. Ahmedabad saw a rash of badly constructed buildings and unplanned roads. It was the devastating earthquake of January 2001 that pushed planners and politicians into action.

Today, Ahmedabad is on the move. Among its big successes is its ‘land pooling’ route to expansion. The municipal authority only acquires 20-30 per cent of the land for developing infrastructure under the Town Planning Act. The remaining is part of town planning but ownership continues to vest with the landowners. This melts resistance as the landlords know the value of their land will spiral manifold. “There has been a stampede to join expansion schemes as landlords found the value of their land shooting up from Rs 2,000 to Rs 20,000 a sq. mt.,” says Dilip Mahajan, the city’s deputy municipal commissioner (projects). “We were able to build the 120-km Ring Road (that bounds the city’s 465-km sprawl) in seven years starting 1997. Bangalore’s is yet to take off, and Hyderabad has only half a ring road.”

Ahmedabad did not adopt the traditional but expensive model of first acquiring land and then selling it; a route that invariably ends in legal disputes. Mahajan says two other measures have helped. First, Ahmedabad adopted a transparent zonal system of property tax assessment. This cleared the backlog of 55,000 legal cases, and property tax collection zoomed to 90 per cent from the earlier 40 per cent. This stabilised the city’s revenues and made it credit worthy. Second, the corporation management was professionalised with the induction of as many as 130 MBAs and chartered accountants.

A host of crucial infrastructure projects have made the country’s fifth largest city a model in urban development. The Sabarmati Development Corporation (SDC) has invested Rs 750 crore since 2005 to clean and free the river’s waterfront and, in the process, reclaim nearly 450 acres. Of this, 14 per cent of the land will be sold to private developers to cross-subsidise housing for slum dwellers, open spaces and parks. The Slum Networking Programme (SNP) is resettling 6,800 evicted families at 47 sites; the city’s slum density has come down from 47 per cent of the population to 29 per cent. “This would not have been possible without the political class playing godfather,” acknowledges Utpal Sharma, dean at the Centre for Environment Planning and Technology (CEPT) University.

Delhi: A World City
Delhi has just celebrated 100 years of being the capital of Modern India. Among the oldest cities of the world, it has always been a bit spoilt, enjoying the patronage of the ruler of the day — the Mughals, the British and, now, the Government of the Republic of India. In its modern form, city planning came to Delhi after the British shifted the capital of undivided India from Calcutta to Delhi in 1911.

Post-independence, Delhi saw a deluge of immigration from Pakistan, and grew to the south and west through ‘refugee colonies’. To create a modern capital, the central government set up the Delhi Development Authority (DDA) in 1957 and the city’s first Master Plan came into being in 1962. The plan zoned Delhi based on land use — commercial, residential, industrial and educational. It also set ‘urbanisable’ limits by creating a 1-km green belt to prevent surrounding urban areas from merging with Delhi.

Shadowing Delhi’s planning and development has been the uncontrolled influx of people from the surrounding states. The 1962 Master plan forecast a population of 5 million by 1981. Delhi far exceeded that figure, and is today home to 22 million people. With a spread of 1,483 km, three times that of Greater Mumbai, and an acquisition of 75,619 hectares over the past 59 years, Delhi has been built as a low-rise city and, therefore, needs increasing swathes of land to accommodate its growing population. No wonder Master Plan 2021 has allocated 277 sq. km for future urbanisation. Things have not got out of hand because of the planned integration of satellite cities such as Gurgaon in Haryana, and Noida and Ghaziabad in UP, that have extended the National Capital Region (NCR) to 33,578 sq. km.

While this relieved Delhi of overcrowding, it led to a transportation nightmare. The Delhi Metro Rail Corporation (DMRC), with an investment of Rs 14,430 crore, has brought relief — 1.8 million people use the Metro system every day. But feeder transport connectivity has been a problem. “Lack of integration makes getting to a destination after disembarking from the Metro difficult. In far-flung areas not connected by the Metro, DTC has not been able to provide bus services,” points out Nimish Jha of the Department of Policy Studies, Teri University.

Housing is another challenge. DDA has contributed just 350,000 homes over the past 40 years. Delhi has also followed a policy of keeping the city centre free of slums; but demolishing encroachments and re-housing the evicted people in trans-Yamuna colonies has only created pockets of poverty. Master Plan 2021 envisions a slum-free city in the next 10 years.

With humungous funding, Delhi has moved. But its biggest stride has been away from babudom and its Punjabi roots. Says Delhi-based author William Dalrymple: “The real leap happened between 1991 and 2000 when Delhi became a real capital, in the sense of attracting people to come and live here from all over... It has moved from being a Washington to becoming almost New York.”

Pimpri-Chinchwad: Detroit Of The East
When driving towards Pune on NH-4, also known as the old Mumbai-Pune Road, the narrow but well-maintained four-lane highway suddenly widens at the Dapodi intersection to become an eight-lane autobahn. At the centre are four lanes of express track, with two lanes on either side for slower, local traffic. The central tracks are guarded by neat, tree-lined dividers and run 12 km to Nigdi. Those in a hurry to get to Pune or beyond hit this high-speed freeway.

Welcome to Pimpri-Chinchwad, Detroit of the East. Initially an industrial suburb of Pune, it became a separate corporation township in 1982 after the villages of Pimpri, Chinchwad, Akurdi and Bhosri were merged. Hindustan Antibiotics was the first to move in in 1952, followed by Tata Motors, Force Motors, Thermax, Volkswagen, and 8,000 SMEs. Like other industrial towns, Pimpri-Chinchwad grew rapidly but haphazardly.

All that began to change in 2006. The Pimpri-Chinchwad Municipal Corporation (PCMC) was looking for funds and the central government was offering it for infrastructure development and housing under the Jawaharlal Nehru National Urban Renewal Mission (JNNURM). But there was a catch. The funds would come only if Pimpri-Chinchwad put together a long-term city master plan and a dedicated planning authority. Municipal commissioner Dilip Bund decided to bite the bullet, and with rating agency CRISIL’s help, evolved a six-year 2006-12 plan.

The money came in. Rs 2,572 crore was pumped into transforming Pimpri-Chinchwad from a filthy industrial suburb to a well-laid out independent township of 1.7 million people; Rs 120 crore went to build the Dapodi-Nigdi eight-lane highway. The water supply network from the Pavana river was beefed up at a cost of Rs 380 crore. A sewage disposal system and storm water drains were created with Rs 350 crore. Lungs were added with 120 gardens that gave the city a green cover of 28 per cent.

The PCMC is currently in the process of implementing a Rs 400-crore Bus Rapid Transport System (BRTS) with dedicated bus lanes serving the inner city. The present municipal commissioner, Shrikar Pardeshi, told BW that housing was a key issue and the city was constructing 33,000 homes for slum dwellers and the urban poor. “We are on course. We have implemented 70 per cent of the 2006-12 master plan and with the mission (JNNURM) being extended by two years, we hope to complete the remaining projects too,” Pardeshi says proudly. The PCMC has robust revenues, 75 per cent sourced from octroi. This has financed the rebuilding of the city on a 2:1 ratio with the JNNURM.

“Earlier, we were in the shadow of Pune. Now we have our own identity,” says JNNURM coordinator Nilkanth Poman. This was recognised when Pimpri-Chinchwad picked up the ‘Best City’ Award instituted by the Union Ministry of Urban Development. An important factor for the success story, Poman says, was that bureaucrats and politicians have worked in tandem.

Hyderabad: Cyber Charm
Known for the beauty of its minars and the Hussain Sagar lake, Hyderabad is steeped in history. Founded in the 16th century, the princely state acceded to the Indian Union and became the capital of the reorganised Andhra Pradesh in 1956. B.R. Ambedkar, when drafting the Indian Constitution, wanted it as India’s second capital.

With its locational advantage and its well-educated workforce (literacy rate of over 80 per cent), Hyderabad has rapidly grown to an urban sprawl of 625 sq. km, and a population of 8 million. In many ways, the city has got its governance right. To ensure integrated administration and planning, the state government merged the Municipal Corporation of Hyderabad with 12 smaller municipalities in 2007 to form the Greater Hyderabad Municipal Corporation. Further, its multiple development agencies were merged in 2008 to create the Hyderabad Metropolitan Development Authority.

The city generates 4,500 tonne of solid waste every day and has an efficient solid waste management system that kicked in in 2010. It also keeps a tight leash on pollution through stiff monitoring and regulation. “In governance, Hyderabad beats all the other southern cities, including Chennai and Bangalore,” says Anirudhh Wahal, director of DTZ Property Consultants.

Post-liberalisation, India’s 4th largest city took an economic leap. Former chief minister Chandrababu Naidu carved out Cyberabad as India’s Silicon Valley, which houses the likes of Microsoft, CA, Oracle and IBM. IT exports from the city, at their peak in 2008-09, touched $4.7 billion, or 12 per cent of India’s total exports.

Infrastructure projects have supported the city’s regeneration. The 11.6-km elevated expressway from the city’s airport is the longest flyover in India. The Rajiv Gandhi International Airport, which replaced the Begumpet airport in 2008, was recognised as the World’s best in the category of handling 5-15 million passengers a year in 2010.

Yet public transport in the city, whose population is expected to touch 13.6 million by 2021, is in shambles. The rickety bus service was sought to be replaced by a modern Rs 12,132-crore Metro rail system that would cover three of the city’s most dense corridors with 71 km of elevated railroad. In 2008, the project, awarded to B. Ramalinga Raju-promoted Maytas Metro, was caught in a financial scam, and came to a grinding halt. L&T has the contract now and work has restarted, but completion of the first phase is expected only by 2017.

The Satyam scam was also the beginning of Hyderabad’s bad days. The movement for a separate Telangana state paralysed the capital, and a nervous business community began moving out. Volkswagen, after homing in on the city for its Rs 3,800-crore car plant, shifted out at the last minute to Pimpri-Chinchwad, near Pune. Construction of realty projects slowed as capital values and rentals crashed.

Hopefully, this is a passing phase in Hyderabad’s long history.