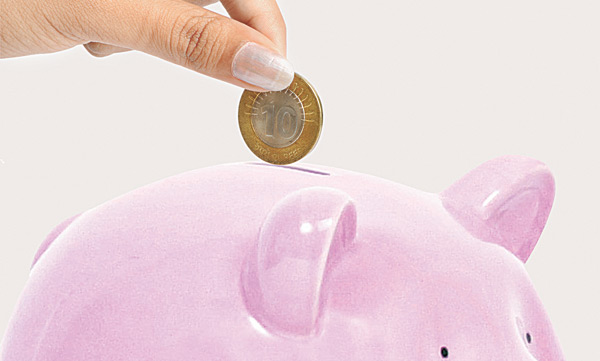 08 November, 2014
Print this article Font size -16+
Banks will continue to be under pressure to raise deposit rates. Year-on-year deposit growth at 13.2 per cent has trailed credit growth at 16.4 per cent. This has forced State Bank of India, Punjab National Bank and a clutch of smaller banks to hike deposit rates across maturities by 50-100 basis points (bps). Unless there is a dramatic increase in liquidity, banks will continue to drink at the Reserve Bank of India’s (RBI) repo window; they guzzle a tad over Rs 1 lakh crore a day now. It will worsen when advance tax outflows of over Rs 40,000 crore come into play.
The move to hike deposit rates contrasts with the widely held view that a dip in lending rates is imminent. Even if RBI were to cut its key rates in April in its annual monetary policy review, banks may shy away from a cut in lending rates by the same margin. The point was echoed in the 23 January meeting of the Technical Advisory Committee on Monetary Policy. Two members felt a 25 bps cut in the cash reserve ratio is needed to reduce lending rates.
— Raghu Mohan
To Call Or Not?
Should a broadband wireless consumer be allowed to use the network for calling, along with data services? That is the battle brewing between Mukesh Ambani’s (in pic, right) Reliance Jio Infocomm (RJIL)and the Rajan Mathews-headed Cellular Operators Association of India (COAI), which represents GSM operators. COAI said the telecom department’s decision to allow RJIL to offer voice services on the 4G network was giving it undue benefits; especially since RJIL got the 4G spectrum at a cheaper price in 2010 because the licence did not allow voice traffic on broadband network. However, the Centre tempered that by imposing a licence fee of Rs 1,658 crore on RJIL.

As things stand, the issue of voice on broadband wireless is unlikely to go to court, because some COAI members — Bharti and Aircel — will benefit if voice calling is allowed on broadband. While that may be the case, it is the ad hoc decision-making by the ministry that is the root of the bulk of problems in the sector.
— Anup Jayaram
The League Of SEBI’s Gentlemen
Sometimes multitasking may not be the best option. The Securities and Exchange Board of India (Sebi) recently brought in two journalists as members of a committee to review insider trading laws.
Journalists have long been on panels, but that shouldn’t stop us from questioning Sebi’s wisdom. First, a journalist
rarely goes beyond reporting on his chosen subject. Which is not the same as spending decades handling issues in the field. Second, wouldn’t there be a conflict of interest for the journalist-member, who may take a lenient point of view on a law he helped draft? That leads us to ask if Sebi would have been better served by choosing another person with industry experience. And if it is just an honorary seat, then why have it at all?
— Abraham C. Mathews
Time To Heed The Signal
If one thought that corporates could breathe rather easily after the welcome move to postpone the implementation of the General Anti-Avoidance Rules (GAAR) till 2016 in the budget, they had better think again.
Finance minister P. Chidambaram took a passive view during his budget speech, but corporate taxpayers are a worried lot since one of the crucial recommendations of the Shome Committee — to excuse investments made prior to October 2012 from capital gains tax under GAAR — has been left out.
This means that all transactions which are intended to get a tax benefit will be open to questioning by the tax department, irrespective of when they were made and whether GAAR was on the cards at the time or not. Perhaps the finance minister is sending a clear signal to corporates to set their house in order before the rules come into effect in 2016.
— Abraham C. Mathews
Cruel Summer Ahead
Just what is causing the rise in domestic fuel prices when international crude prices are stagnant or falling? A four-year analysis shows that while crude prices fluctuated for a while, they are back to over $110 a barrel. The other culprit is the depreciating rupee that is ruling just short of Rs 50/$, making imports expensive.
Of Facts And ‘Good Intentions’
The United Progressive Alliance may claim the farmer is close to its heart, but facts prove otherwise. State-run banks, over which it has control, shy away from lending to rural India. The scorecard at end-March 2012 (the latest full-year data) from the Reserve Bank of India (RBI) tells us that 15 state-run banks failed to meet the sub-target for agriculture under the priority sector. Of every Rs 100 a bank loans, Rs 40 has to go to the priority sector, of which Rs 18 is for agriculture.

Banks have defaulted on both counts.The reluctance to lend is symptomatic of a deeper malaise of mounting dud loans. In FY07, agricultural dud loans stood at 3.17 per cent, which rose to 3.32 in FY08. It fell to 1.92 per cent after a farm-loan waiver in FY09 (which was an election year). It has since gone up 3.49 per cent (FY11). But the waiver wasn’t aimed at farmers as is widely held; it was to clear up bank books. RBI’s Report on Trend and Progress of Banking in India (2011-12) says, lending institutions were compensated by the Centre in a staggered manner.”
The M.V. Nair Committee on priority sector, to identify what went wrong, says, “Past experiences of debt-waiver schemes do not show any positive impact on credit culture.” But it gets you the vote!
­— Raghu Mohan
One Size Fits All?
With the ongoing tug of war between French telecom regulator ARCEP and Microsoft’s Skype, the big question is: How to define a telecom firm in the Internet age?
ARCEP has asked prosecutors to investigate Skype — which offers voice and video calls using voice over Internet protocol — over its failure to register as a telecom service provider. The regulator argues that since Skype allows users to make voice calls to France’s fixed and mobile subscribers, it has to allow emergency calls and allow interception of calls when needed, which Skype has refused to do so far. Should Skype comply, it will have to bear the added cost of maintaining Internet call records. Also, the global implication may be huge, with other countries making similar demands.
This trend could be dangerous for mobile application firms like Viber, Nimbuzz, etc., which offer free voice calls, since such requests may be made of them too. But that is something conventional telecom operators would want.
— Anup Jayaram
Will The ‘Real’ SUV's PleasePay Up
When P. Chidambaram hiked the excise duty on sports utility vehicles (SUV) to 30 per cent in the budget, he did so on the ground that being bigger cars, they use up more space and pollute more.

Perhaps, it’s time to behave responsibly with the freshers — take them in, or turn them down.
— Swati Garg
The Shape Of Tech In 2013
As The world moves on to 4G, India is making the shift, albeit with a bit of a lag, according to the Deloitte ‘Technology, Media and Telecom Predictions 2013’. But that’s not something to rue, since the Indian telecom industry is in the midst of a change, with network operators beefing up their 3G coverage as well.
The report says that while more smartphones are expected to be sold this year, it will be a while before 4G services take off in India. Internet usage on phones is expected to go up, driven by those who use their phones for social networking. But even then, the numbers may not be enough for operators, since there may not be a jump in the average revenue per MB.
Globally, 2013 could see the emergence of dedicated social media MBA programmes. In India, an area where technology could find increased demand is retail, as both online and offline retailers address new segments of the population. This could give rise to firms focusing exclusively on retail technology.
— Anup Jayaram
Beware Of The ‘Black Hats’
For those obsessed with mobile phones, keeping data secure is going to get difficult. According to analysts from market research firm IDC, mobile malware is growing by 300 per cent and the most vulnerable operating system is going to be Android. The difficult part will be tracing the ‘black hats’ — the bad guys, who are part of a new wave of underground operations in Eastern Europe.
With a phone, these guys can switch off the power grid of a country or place sleeper bots in your phone to steal bank details. Mikko Hypponen, CEO of security software firm F-Secure, has been stressing on the need for global legislation to catch the ‘black hats’. He says that spending on antivirus protection is not the solution because malware is regenerative. Globally, around $48 billion is stolen every year from insurance companies through false claims.
In the Internet era, CIOs and business heads need to form a consortium to bring in more stringent legislation, since the matter of mobile security is a global concern. Governments and corporates across the world need to realise the importance of addressing mobile security threats. So, for those who claim that the cloud is secure, a more critical view of the digital space is called for.
— Vishal Krishna
Money Down The Drain
This may be a case of money going down the drain. This past month, there have been heated Parliament debates over — and even a 15,000-member march from Vridavan to Delhi — pollution in the Ganga and Yamuna. The budget had also allocated an unprecedented Rs 1,400 crore for water purification and promised programmes to incentivise effluent treatment plants.
This comes as a surprise since the minister of environment and forests, Jayanthi Natarajan, is on record saying that the water in both rivers had “not shown the desired improvement”. The Ganga Action Plan (GAP) and Yamuna Action Plan (YAP) have been there for years. But after guzzling Rs 1,436 crore (GAP, since 1985) and Rs 1,300 crore (YAP, since 1993), both rivers still contain high bacterial contamination. If crores of rupees, spent over
decades, haven’t managed to clean the rivers, one wonders what will happen to the latest allocation.
— Moyna
Weak Defence Against Spam
From Nigerian princes with a sob story and bountiful riches to share (if only you send them some initial money), to spurious drug sellers promising enhancement of certain body parts, electronic spam is something all of us deal with. However tough the filters, spammers find a way around them. A recent report by security vendor Sophos says India sent out the third highest quantity of spam across the world, after the US and China.
Surprisingly, this was an improvement from the numero uno position that India had occupied last year. This is not to suggest that most users in India are using their networks to spam others across the world. It just indicates that most users are careless, and that they allow their computers and networks to be hijacked and compromised so as to act as bots and spew spam.
India’s IT Act does not have specific anti-spam provisions, though some, like the much maligned Section 66A, when interpreted loosely, can be used against spammers.
— Venkatesha Babu