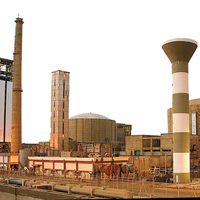 The real cause for worry is the fear of a meltdown at the Fukushima-Daiichi nuclear power plant that has already had three explosions after the 11 March tsunami. Radiations from the plant have reached dangerous levels. Nearly a quarter century after the Chernobyl disaster, the Fukushima explosions were seen live on television screens across the world. It has once again raised the debate on whether the world needs nuclear power plants at all. The six boiling water reactors at Fukushima-Daiichi, installed in the 1970s, have an installed capacity of 4,546 megawatt (MW).

In sharp contrast, the 20 nuclear power reactors that India has account for 4,780 MW. India has 18 pressurised heavy water reactors, while two units in Tarapur are boiling water reactors, like the ones at Fukushima. Currently, nuclear power accounts for just 2.2 per cent of India's installed power capacity. This is quite in sync with China (1.9 per cent) and Brazil (3 per cent). Globally, nuclear power accounts for 15 per cent of the installed capacity. The big consumers of nuclear power include France (75 per cent of installed capacity), South Korea (35 per cent), Japan (30 per cent), the US (20 per cent) and Russia (18 per cent). While India's nuclear capacity is marginal, it has drawn up ambitious plans to increase nuclear power generation manifold over the next decade based on the Indo-US nuclear deal of 2008. According to the plan, it is estimated that by 2020, India's nuclear capacity will be around 30,000 MW.

So what happens post-Fukushima? The controversial debate over nuclear power will be reopened. The UPA government is likely to face immense pressure in Parliament and outside from the Left parties, NGOs and anti-nuclear groups on slowing down the growth of nuclear power. Prime Minister Manmohan Singh, the chief proponent of the Indo-US nuclear deal, has sought an immediate technical review of all safety systems at nuclear plants.

There is local opposition, too. Residents are opposing the setting up of India's single-largest nuclear power plant (9,900 MW) at Jaitapur, 420 km south of Mumbai on the Konkan coast. The Fukushima crisis will only heighten worries. Ironically, the choices for India are limited. As the economy grows at over 8 per cent, demand for power is expected to rise at over 10 per cent per annum. In a scenario where nuclear power is scarce, the demand for import of coal and liquefied natural gas (LNG) is expected to rise sharply. That is not going to be either easy or cheap. The Japanese crisis has led to a hardening of global gas prices. However, it is not clear whether it would lead to a sustained rise in gas prices since Qatar and Russia have enough gas reserves to tide over the possible increase in Japanese demand.

Another area of concern for India could relate to Japanese investments in the country. Japan has been instrumental in providing soft credit for large infrastructure projects such as the Delhi Metro and the proposed Delhi Mumbai Infrastructure Corridor. With the Japanese economy back to rebuilding, the volume of such credits could slow down.

One thing is certain. The Japanese economic growth should pick up pace over the next few months. After all, this is a country that literally rose from the ashes after the World War II. But there is another certainty — it will be a long time before the world feels more confident about expanding nuclear power capacity.