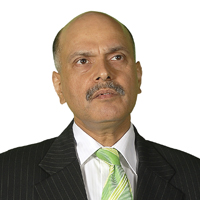 Why is a successful new media player like Network18 so keen on old media? The Raghav Bahl-led media conglomerate made a splash integrating a wide range of verticals — from wire agencies to news websites to television, and print. But despite the current slowdown and plummeting ad revenues, Bahl continues to have an appetite for print media. Having launched the international business title Forbes in India in May 2009 and the glossy special interest magazine Entrepreneur, Bahl is believed to have renewed his earlier failed bid to acquire Business Standard (BS).

Seeing the writing on the wall, print behemoths are lining up to launch news channels. But Network18 has been moving the clock back. Close on the heels of the success of its flagship business channel CNBC-TV18 and the news channel CNN IBN, the group has put as many as 20 print titles under its belt by virtue of its acquisition of Infomedia in December 2007. These print products along with fortnightly Forbes India account for sales of Rs 150 crore, around 20 per cent of the group's turnover. But in terms of performance Infomedia18 is proving to be Bahl's Achilles' Heel turning in a whopping net loss of Rs 85 crore in fiscal 2008-09.

Though print is still strong in India with a 45 per cent share of the ad pie compared to the 25 per cent in the US, the drift is there for all to see. Businessweek's acquisition by Bloomberg for a measly $2.5 million is a case in point. Readership and ad revenues are falling in India too. The January-June 2009 ABC figures show only seven of the 52 daily editions registering a rise in circulation compared with the previous six months; ad revenues have dipped 15-20 per cent.

Yet, Bahl is keen on print as he sees it as a missing piece of the jigsaw puzzle that will provide the synergy to television and online news content. "We want to be in all sectors of media. We want to create a strong ecosystem to keep the media consumer within our fold," Bahl had told BW in an earlier interview. It is this philosophy that has guided the making of his media empire.

The Paper Trail
Network18's print chase started about two years ago, after it had established itself in electronic media with channels CNN-IBN in English and IBN 7 in Hindi. Being greenhorns in the print space, its initial strategy was to strike alliances with seasoned players. It was a logical strategy, but involved extraneous risks. For instance, in 2007, Network18 and Jagran Prakashan, the owners of the highest-circulated Hindi daily Dainik Jagran, inked a 50:50 joint venture (JV) to launch a Hindi business daily with plans for other regional titles as well.

The CEO of the Chitralekha Group, Bharat Kapadia, was hired in February 2008 to head the JV, and by mid July had put together a team for launching both a Hindi and a Gujarati business daily. But differences within the Jagran Group slowed down the project. And "by September the JV was aborted", says Kapadia, who now heads the Lokmat Group. He suspects "the viability of the venture was a question mark once recession was on us".

The launch of Forbes India was not smooth either. (Businessworld is a competitor of Forbes India). Along with the Jagran JV in December 2007 came the announcement that the company had reached a content licensing agreement with Forbes Media to launch the brand in India. But regulatory bottlenecks delayed the launch of the magazine by over a year.
Group CEO Haresh Chawla claims Forbes India, with an estimated investment of around Rs 25 crore, was performing well. The magazine claims a print run of around 70,000, but industry sources say 40,000 is a more realistic number. Chawla says he expected to break even early with ad rates that were 2.5 times higher than its competitors, and a pricing policy that did not believe in subsidy. "Rs 50 is only the invitation price; we might increase it later," he says.

It is not coincidental that all these launch plans were being scripted around December 2007. That was when Network18 was on top gear for expansion. One of its biggest acquisitions — and the print pillar of the group — was Infomedia. It acquired a 40 per cent stake from ICICI Venture for around Rs 178 crore, and then bought another 3.65 per cent through an open offer pushing up the cost to about Rs 220 crore.

Analysts warned that the valuation was excessive, but Bahl saw Infomedia as an important launch pad for his print plans. With Infomedia, he inherited the Yellow Pages brand successfully built by the Tata Press (later acquired by ICICI Venture) as well as a slew of business-to-business (B2B) and special purpose magazines such as Overdrive and Chip. More important, Infomedia had a presence in over 20 cities, a strong network of printing presses and an organised contract publishing business.

Providing the rationale for the buy, Chawla told analysts: "This was a great complementary asset to get into our fold in the print space. India is still a very large, growing print market and clearly this completes our offering and we can be in all four parts of this whole media space."

But things worked out differently on the ground. A combination of mismanagement and the economic downturn ensured that the company plummeted into an abyss of heavy losses. The sudden evaporation of contract print orders and withdrawal of advertising from its niche publications pushed Infomedia18 into the red. The company, which made a profit of Rs 4 crore in FY07, slipped into the red by Rs 5 crore in FY08 after being acquired by Network18. By the end FY09, it posted a net loss of Rs 85 crore and its turnover was just Rs 126 crore, a sales level it had touched three years ago (see ‘Losing Streak' on page 38).

Chawla says the company has been restructured by trimming the large workforce. The company also has plan to hive off the printing units and outsourcing business, which are losing money. But, with advertising vanishing, it will be difficult for Infomedia18 to turn profitable — it notched up net losses of nearly Rs 11 crore in the first quarter of this fiscal.

"It was bought at too high a price; it does not have the right people; and there is a lack of focus," says Anurag Batra, chairman of exchange4media, who in addition to his portal publishes a slew of special interest titles. Another print executive, who worked closely with Network18 said the mix of titles was not correct, and "perhaps they should close down a few magazines". Not long ago, Bahl himself said in an interview with exchange4media: "With hindsight, it (Infomedia) was an extremely expensive acquisition." He did not respond to queries emailed to him.

Nikhil Vora, an analyst with IDFC-SSKI, who has been tracking Network18, forecasts Infomedia18 will end this fiscal with a net loss of over Rs 30 crore and believes part of the problem is that Infomedia18 and some of the other verticals are under-capitalised. "An option the company is seriously considering is the sale of Infomedia18," says Vora.

Attempts to acquire BS has also failed so far. If the media industry's rumour mills are to be believed, Bahl once again came close to acquiring the business daily recently. "We had one round of talks, but now there is no conversation," says Chawla, denying that an acquisition was near at hand. He blames Uday Kotak, the majority 55 per cent shareholder in BS, as being the sticking point. In March 2008 too, Bahl had come close to buying BS, but then too, Network18 sources say, the daily's owners "were asking for too much".

For Bahl, the quest for a business paper on his platform has been long and arduous. The Pearson Group, publishers of Financial Times (FT), which bought a 14 per cent stake in Business Standard (BSL) in 2003, ended its relationship with BS in April 2008. Bahl saw an opportunity and quickly did a content deal with FT for his portal Moneycontrol.com. His plan was to ultimately bring out a cutting-edge business daily under the FT brand. But a series of legal issues and early editorial reverses coupled with the economic slowdown delayed the India launch of FT. But this does not mean Bahl will not try again. "Raghav Bahl will get into print because it is larger than its size. The brand value of a daily newspaper along with CNBC-TV18 is far larger than the revenue it might generate," says Vora.

Springboard Or Millstone
This brand value that print lends, however, is proving to be costly and debilitating. Expensive buys such as Infomedia has nudged Network18's debt up to Rs 1,700 crore, which it is finding difficult to service. Also, the cumulative losses of Web18, Newswire18 and Infomedia18 add up to over Rs 100 crore in FY09. With only CNBC-TV18 a profitable operation, it is a difficult situation for the group to deal with. "With operational businesses making losses, and gestation losses of Colors, a high financial leverage is key risk for the TV18 group," says a critical IDFC-SSKI Securities report on the group.

The group has tried to tackle high debt by raising Rs 500 crore through convertible debentures, a qualified institutional placement (Rs 200 crore) and a preferential allotment (Rs 120 crore). But this has brought down the promoters' group holding to 50 per cent. This is the minimum equity level required for news operations and it thereby limits the group's options to take the equity route to raise further funding.

Infomedia18, the company Bahl thought would be a springboard to a major expansion in print, is today a millstone around his neck. To stop Network18 from bleeding, he may opt to rid himself of the baggage. But there is little doubt he will try, sooner than later, to go for a business daily to keep his news television brands in the reckoning.