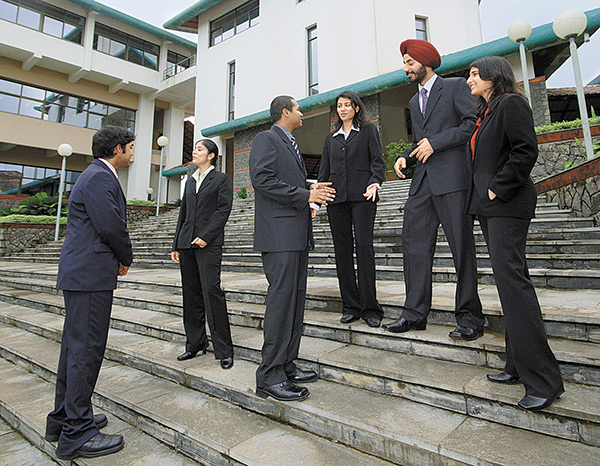 02 December, 2014
Print this article Font size -16+
At the recent TieCon delhi 2014, the premier event for entrepreneurs, a noticeable feature was the presence of a sizeable number of management students. Among them were a busload of students from the Footwear Development and Design Institute’s (FDDI) school of business management, seen posing questions and taking notes. “We make it a point to bring our students to events such as TiEcon so that they can listen to entrepreneurs and get inspired,” said a teacher from FDDI, adding, “We are not shirking our placement responsibilities. But we want them to know that starting their own venture is a great option.”

Back on B-school campuses, the adage that when one door closes, another opens seems to be ringing true. Placements have been hit by successive years of recession between 2008 and 2012 and the changing recruitment patterns of companies. But, even as companies have cut down on hiring, parallel occurrences such as the diversity imperative have led many to broaden their hiring base. “Companies want a more diverse set of skills now,” says Hitesh Oberoi, managing director and chief executive officer, Info Edge, which owns job portal Naukri.com. “Instead of visiting the same engineering and management institutes, they are looking at liberal arts colleges and design institutes for possible hires. We, too, have recruited from the National Institute of Design and colleges offering specialised e-commerce courses.”

This means the placement cells of B-schools — especially those in far-flung places and not in the top bracket — face competition from non-management institutes for job offers. When the economy is doing well, companies fan out for hiring, but in times of slowdown they visit only a few top-notch colleges.

Again, even as placement opportunities from bigger firms began to dry up, job offers from startups and students starting their own ventures shot up by 50 per cent. This is no fad as placement cells of most management institutes continue to encourage this shift as a way to cope with the slowdown.

Incidentally, in the past four years, the startup ecosystem in India has been looking up and venture capital funds have been scouting for new business ideas to invest in. Organisations such as TiE (The Indus Entrepreneurs) are becoming stronger. Co-working spaces offering cheap places to work out of have sprung up in many Indian cities. Entrepreneurial meet-ups and mentorship programmes have also taken off.

Take the example of Siddharth Shah, from the 2010-12 batch of IIM Ahmedabad. He gave job offers a miss and opted to start his own company. “A B-school is not merely a ground for seeking jobs; if anything, it’s an insurance policy,” says Shah. “I knew that if I failed, I could always find a job with my credentials. But if I had let go of the opportunity then, when would I have mustered the courage to follow my dream?”
Shah’s startup is called Dial Health, a healthcare logistics and pharmaceutical retailing company. In just two years, it has managed to get 150 companies as clients.

Many B-school graduates are joining startups, especially those in the IT sector. “Compared to 10-15 years ago, the startup ecosystem is far more robust now,” says Oberoi. “More students are willing to join startups. There is no stigma now. Even if you fail, other companies will hire you. At Info Edge, we have hired those who tried out with startups and failed.”

Placement cells are also nudging students towards the social sector. For example, this year, the XLRI batch of 365 students bagged 385 job offers between them, yet the institute’s placement cell organised a parallel process called Parivartan for summer internships with NGOs. “As a socially aware and conscientious institution, XLRI launched a parallel placement process,” says institute director E. Abraham. “The aim of this initiative is to show our solidarity to social causes.”

There are other initiatives that placement heads at management institutes are taking. Sapna Agrawal, head of placements at Indian Institute of Management Bangalore, says, “We invite recruiters from all sectors so that one fast-growing sector may make up for another that is slowing down.”

Most B-schools have begun looking beyond the usual big recruiters and are inviting new companies on campus. “Some of the big companies are rainmakers,” says Kanwal Kapil, chairperson, Placements, Management Development Institute Gurgaon. “They recruit more actively during recession because they know that fewer companies will offer jobs during such a time.”
Students also try to fare well during summer placements. As a result, the number of pre-placement offers (PPO) goes up and also the probability that students will accept them, says Kapil. MDI’s placement committee invites companies that are ready to recruit one or two graduates in a niche segment.

Hence, the total number of recruiters visiting B-school campus increases. For example, when the economy is in the pink of health, 130 companies visit MDI on average, but during a recession, the number is between 170 and 180, claims Kapil.

R.C. Natarajan, director, T.A. Pai Management Institute (TAPMI), Manipal, concurs. He says during a recession, there are fewer jobs and more competition among students, so PPOs rise — TAPMI was no exception. “Summer placements were better for us and last year we had double-digit international placements,” says Natarajan. He credits the accreditation from the Association to Advance Collegiate Schools of Business as a reason for bagging more international placements.

This is another trend on several campuses — a wider choice of international roles for students. XLRI claims a steep rise in international offers for internships. Companies such as M.H. Alshaya, ABG, Altisource, HUL, Kellogg’s, Nomura, PepsiCo, Godrej as well as a European hedge fund were among those who offered multiple international roles to B-school graduates.

With the Indian economy picking up, most B-schools expect a better placement season next year. But having endured tough times, they are also prepared for worst-case scenarios.