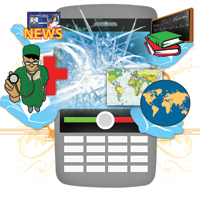 Here is an uncommon admission from a sector that is seeing new players entering nearly every day: "The ecosystem is not at all shaping up in the value-added services (VAS) industry," says a VAS company owner with over a decade of experience. Any service on mobile other than voice, even SMS, is a VAS.

Admittedly, as with other sectors, the VAS industry is only going through growth pangs before it reaches maturity. And although the quality of services and the key challenges in providing them remain the same, the sudden increase in content developers and aggregators has made the market intensely competitive. What is even worse for the VAS vendors is the high minimum guarantee — which, at times, runs into a couple of crores — that they need to pay the content producers for copyright.

VAS travels to users through different channels — vendors collect content, buy rights, and forge tie-ups with telecom companies (telcos). Music, for instance, is bought from its creator or owner and sold to the end-user through a revenue-sharing partnership with the telcos.

Lack Of Innovation
There has not been much innovation in VAS apart from CRBT (caller ring back tones). The culture of utility-driven VAS has not really caught on, largely because service providers have kept pushing CRBT and music. "CRBT is more important for smaller towns, and the take up is quite high," says Krishan Durbha, head of VAS at Reliance Communications, one of India's largest telecom operators. Location-based services — finding a restaurant, hotel or shop — are not widespread.

But the digital entertainment scenario is expected to change with technologies such as DLNA (digital living network alliance), which will allow users to interlink devices such as iPod, television and mobile phone, to use and share content such as music and games on what is called a ‘converged atmosphere'. But can the smaller players survive till that happens?

In India, Hungama, Bharti's Comviva, OnMobile and One97 are some of the large VAS players. World Phone has been around for a decade, but offers only astrological services.

Interestingly, VAS is not restricted to mobile telephony alone — direct-to-home (DTH), cable and internet are contributing significantly to it. For example, DTH company DishTV and Indiatimes.com have tied up to provide VAS —  users can preview mobile content such as ringtones and wallpapers on television and download.

The Japanese market, and those in the West, which have better bandwidth, have matured and offer diverse content in areas such as education and healthcare. In Japan, VAS vendors get around 75-80 per cent of VAS revenues of telcos. In the US, AT&T shares almost 70 per cent of its VAS revenues with VAS vendors.

The biggest question, therefore, is a fundamental one: "Are we giving value to the consumer?" asked Vijay Shekhar Sharma, managing director of One97, at a VAS summit organised by IAMAI in Delhi recently. "It is a myth that mandi bhav (vegetable and grain prices) and weather reports are adding value for the consumer."

Understanding The Consumer
The Indian VAS industry started with ABC (astrology, Bollywood and cricket). While early ABC service providers have grown their businesses, what is happening with new players is a mystery. But with the growing spread of mobile telephony, they are able to make some money — enough, at least, to lure more players in.

Durbha of Reliance Communications believes that VAS has a long way to go and "voice is still the killer application". He is of the view that though VAS operators are maturing, investments have not taken off in the sector, and whether the user is getting the right content is not yet known. "We are using business intelligence to understand the behaviour of the user, and things are slowly falling into place."

Hungama mostly relies on entertainment but is now focusing on livelihood and lifestyle-based services. "A lot of experimentation and study is going into understanding the need of consumers," says Hemant Jain, senior vice-president of Hungama. He says that pull-based services such as retail — where a service is not ‘pushed' at the consumer but the consumer ‘pulls' it according to his need — should be used more. "Healthcare, education and jobs can also be useful in connecting with consumers."

The decade-old World Phone, which has a long association with Vodafone and had clients such as AT&T, specialises in astrological and devotional content. "We have 1,000 Acharya-level astrologers, who are spread across 15 locations and provide services in 10 languages," says Vivek Dhir, managing director of World Phone.

KPMG expects gaming to become a Rs 300-crore market. Providers of games usually develop them in-house. "We have almost 1,000 games on our IP (internet protocol) and all of them are built in-house," says Jain of Hungama, which has a separate team for developing games. Many smaller players in the gaming business are only playing the role of a content supplier to service providers.

CanvasM, a VAS provider that started two and a half years ago as a joint venture between Tech Mahindra and Motorola, has tie-ups with most service providers, chiefly in multiple-gaming services and digital asset management. "Smaller companies are entering because everyone has an idea," says Jagdish Mitra, CEO of CanvasM. "The challenge will be to market the concept — most players will fall out at that stage."

The 3G Hype
While the addition of 3G (third generation) spectrum, which will be available after the soon-to-be-held auction, will change the way content travel over networks, it is not likely that data revenues will overtake voice. Some VAS players admit that India is a price-sensitive market and adoption of any service will take time. "Let us play with a little caution on 3G," says Jagdish Mishra, CEO, Buongiorno, a new VAS player in India with an Italian lineage. "I would like to challenge the assumptions that 3G will become the solution for the VAS industry."

In fact, a lot of dissonance can be expected in user experience. "It will be interesting to see how the industry shapes up in the next three years," says Sangeet Chowfla, executive vice-president of Comviva, a Bharti enterprise previously known as Bharti Telesoft. "3G is over hyped."

Nevertheless, "Once 3G happens, there will be more access to more content over the internet and on the phone," says Patel of EY. Increased internet usage will also bring in more users. But, though 3G might enable things at a faster pace, it is "better content that will give better revenues, not speed", says Durbha.

What Next?
Apart from a few location-based services, movie ticket booking and financial inclusion (banking the unbanked, providing loans and insurance), not much can be done over a mobile phone, which is yet to take the form of a converged device. Hungama is of the view that there is now greater interdependence between services such as SMS to manage financials.

With average revenue per user going down, data will gain prominence. Services such as Tata Teleservices's (TTSL) English Seekho for rural consumers is one of the more innovative utility-based services, where voice service is used to teach English at Rs 30 per month. VAS contributes 13 per cent of TTSL's revenues. "We have also come out with a location-based service called Ask Me, through which people in smaller cities can find a doctor," says Lloyd Mathias, chief marketing officer, TTSL.

Some start-ups are trying to differentiate themselves from the larger ringtone providers. For instance, once a paid service starts, it becomes difficult to stop it. Now, for the first time, a particular service can be disconnected with a single SMS. VAS provider mCarbon has partnered with Airtel on the ‘start and stop' service. "It is high time there is governance in the system," says Rajesh Razdan, co-founder and director of sales and marketing at mCarbon.

Rather than spamming a consumer's inbox, VAS players should approach them keeping their profile of usage in mind. "Segmentation will lead to higher conversion and penetration of VAS, helping the operator to save on marketing money," says Jain. In the years to come, more meaningful content is expected to emerge. "A lot of VAS companies are not growing because the canvas is huge and it is difficult to innovate continuously," says Milind Pathak, co-CEO of Buongiorno.

Even though there is no dearth of ideas, the ability to sustain them in the market is challenging. And despite being around for some time now, VAS vendors are still surviving on low margins. Yet most of them are bullish about the future. Indeed, in an industry full of confusion, everybody has a different story to tell. "In this run, there will be hundreds of VAS players. Only some will survive the consolidation," says Chowfla. "The industry is reaching the hill of hype, heading towards the valley of despair, and then there will be an upward spiral of growth."