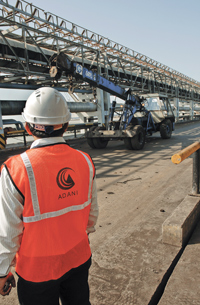 08 November, 2014
Print this article Font size -16+
An Environment Ministry panel held that a port and SEZ project of Adani group in Gujarat's Mundra violated green clearance conditions and recommended creation of a fund of a minimum of Rs 200 crore from the project cost for ecological restoration.

"There is incontrovertible evidence that Adani project has violated environmental norms," said the five-member committee headed by environmentalist Sunita Narain in its report.

The committee asked the government to create an environment restoration fund, which should be one per cent of the project cost (including the cost of the thermal power plant) or Rs 200 crore, whichever is higher.

"The fund should be used for remediation of environmental damage in Mundra and for strengthening the regulatory and monitoring systems," it said.

Due to non-compliance of environmental clearance rules by the company, there has been widespread destruction of mangroves and deterioration and loss of creeks near the proposed North Port, said the report, which was presented to Environment Minister Jayanthi Natarajan.

"Seventy-five hectares of mangroves have been lost in Bocha Island, which was declared as a conservation zone.

"The company has not taken precautions to guard against blocking of creeks because of construction activities; satellite imagery shows signs of deterioration and loss of creeks near the proposed North Port," it said.

The panel did not put the project on hold as it observed that it has moved very far but advised the ministry to cancel environmental clearance of the North Port.

Natarajan assured the committee that the recommendations would be looked into by the government.

Reacting to the development, the Gujarat-based firm said since the north port has not been developed at all, it would not impact the current operations of the company.

The Adani waterfront and power plant project have been in the eye of the storm for its alleged adverse ecological impact.

Based on the complaints received, Environment Ministry had set up the committee to examine the allegations.