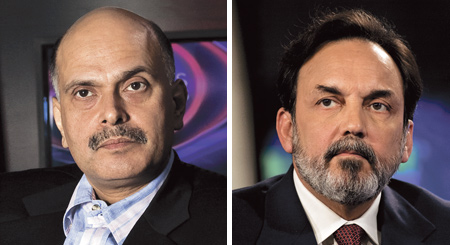 Dependent as it is on advertising revenues, the media and entertainment industry is among the worst hit in the slowdown.

Advertisers have been trimming their budgets, and projections for ad revenue for the current financial year vary from no-growth to de-growth of 10 per cent. As the first quarter results trickle in, news organisations and entertainment channels are facing the thick end of the stick despite companies' efforts to par down their costs.

The converse is also true. Those media companies that are not entirely dependent on advertising revenue, and have managed to diversify to garner other sources of revenue, have bucked the trend as Sun TV and, to some extent, Zee Entertainment (ZEEL) have shown. (Some of these media companies are competitors of ABP, which publishes Businessworld.)

Among the biggest disappointments in the first quarter results has been TV18. Performing below analyst projections, TV18 reported revenues of Rs 107 crore, an operating loss of Rs 4.2 crore and a net loss of Rs 40.6 crore as compared to last year's Q1 loss of Rs 5.3 crore (see ‘Grim Situation'). Though the company's flagship channel, cnbc, is the industry leader, this did translate into higher ad revenues, and income from the core news operations declined 35 per cent to just Rs 57 crore, while the net loss for this segment was Rs 28.3 crore. Unfortunately, its new media operations — Web 18 and Newswire18 — continued showing net losses of Rs 8.6 crore and Rs 1.4 crore, respectively, despite growth in revenues. Infomedia18, the print segment of the company that has always been something of an Achilles Heel, also dragged the company down with a net loss of Rs 2.4 crore. After a phase of robust growth, TV18 has had to face a losing streak with 2008-09 ending with a net loss of Rs 170 crore.

With the launch of Times Group's new business channel, ET Now competition will only increase for CNBC. There are other issues too. An IDFC-SSKI report, authored by analyst Nikhil Vora, sees problems ahead, with TV18 continuing to fund gestation losses of Web18 and Infomedia18, a high net debt of Rs 850 crore and limited options to unlock value, given the group's complex structure.

The silver lining for Network18 is its group company IBN18 posting a 36 per cent growth in revenue of Rs 57 crore. This was mainly driven by Viacom18's channels Colors and MTV, which garnered Rs 106 crore in revenues. As per the revenue sharing arrangement, these two channels contributed around 34 per cent to IBN18's kitty this quarter, helping it to trim net losses to Rs 7.2 crore from Rs 21 crore last year.

Ad Revenues Stumble: NDTV's results too are nothing to write home about, but analysts have noted that the company has trimmed costs successfully. Though its consolidated revenues rose in the first quarter by 9.6 per cent to Rs 131 crore compared to Q1 of the previous year, NDTV turned in a net loss of Rs 81 crore. Revenue from news operations dipped 5 per cent to Rs 80.1 crore from the Q1 of the previous year, despite additional ad revenue from coverage of the national elections and the budget. An area of concern for the company is its English news channel NDTV falling behind Times Now, currently the No. 1. For the whole year, the company made an operating loss of Rs 484 crore; but with a stake sale of 26 per cent to NBC Universal in its entertainment business, NDTV Imagine, bringing in Rs 624 crore, the company could show a net profit of Rs 119 crore.

The only saving grace has been the performance of the entertainment vertical NDTV Imagine. It accounted for Rs 51 crore in revenue, an impressive 30 per cent growth from the previous quarter. The channel is at a strong No.4 position among Hindi entertainment channels.

"I don't expect ad revenues to improve before October this year," says Raj Nayak, CEO of NDTV Media, who markets airtime for NDTV as well as several other channels. "With an increasing number of channels, audiences have got more fragmented, while the advertising pie has remained stagnant."

Nayak, also the president of the International Advertising Association, says: "The economics of almost every Hindi entertainment channel is a cash burn of Rs 85 crore and a recovery of Rs 35 crore per quarter. The question is: How do we make up the Rs 50-crore-hole every quarter?"

Sounding a warning note for the future, Zee Entertainment chairman Subhash Chandra says: "We do not see early signs of recovery in advertising revenues."

Bucking The Trend: In comparison, Sun TV Network with diverse operations — from broadcasting to cable distribution, DTH and radio — showed a healthy growth of 17 per cent in revenue for FY09 touching Rs 1,008 crore and a net profit growth of 19 per cent at Rs 437 crore. The company is in the red by over Rs 300 crore for its DTH operations (Sun Direct), and its radio business net losses increased from Rs 40 crore to Rs 69 crore. Yet, it made up these hits from strong revenues from broadcasting and distribution.

Interestingly, Sun TV, with a virtual monopoly over the Tamil news and entertainment market is not dependent on the vagaries of advertising by following a business model that sells airtime slots to TV content companies at fixed rates leaving these production houses to market advertising time.

Zee Entertainment Enterprises (ZEEL), similarly, would have faced a bigger hit with advertising revenues falling 29 per cent; but the company managed to stay in the black with a strong performance in subscription revenues. For the first time, the company garnered higher revenue from subscription — at Rs 241 crore accounting for 51 per cent of total revenue — than it did from advertising that contributed Rs 198 crore or just 41 per cent of the kitty. Interestingly, DTH subscription revenue showed the strongest growth — 88 per cent at Rs 46.7 crore.

In times when generating ad revenues becomes more and more challenging, subscription revenue and other revenue sources should be explored more vigorously by media companies.