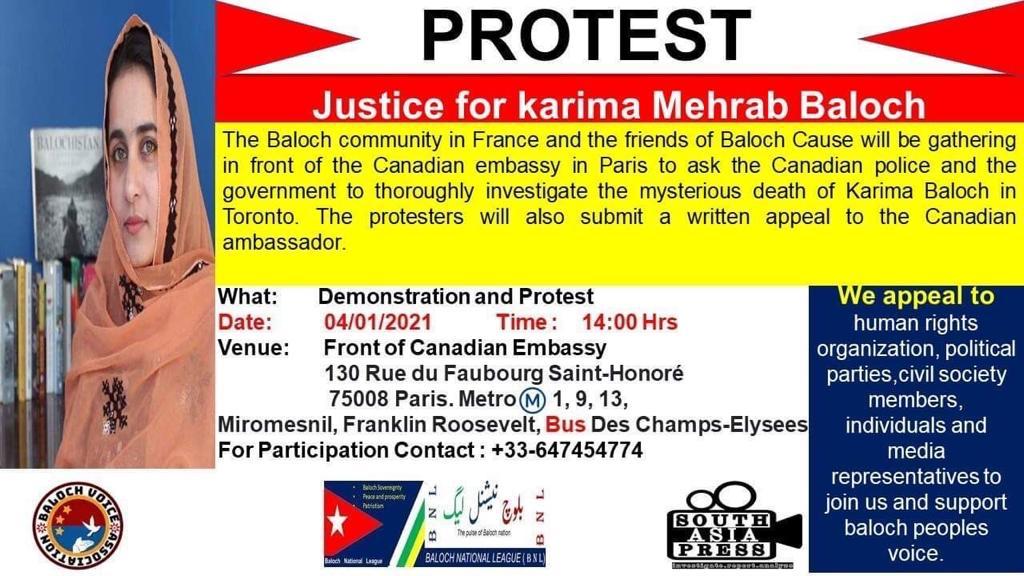 The association said the protest will be held to urge Canadian authorities to conduct a fair investigation into the death of Karima and to seek justice for her family.
Protests have been held in several parts of the world demanding justice for the activist.
On December 29, a protest was organised in front of Consulate General of Canada in New York.
The demonstrators chanted slogans, demanding a fair, thorough and independent investigation from the Toronto Police in this high profile case, according to the unverified Twitter account of Niaz Baloch, General Secretary of Baloch National Movement UK Zone.
"Protest in front of Consulate General of Canada in New York, USA against the mysterious death of #KarimaBaloch in Toronto, Canada. The protestors demand a fair, thorough and independent investigation from the @TorontoPolice in this high profile case," Niaz tweeted.
Toronto Police had said they do not consider Karima's death as suspicious but protestors including fellow Baloch and other minorities from Pakistan say she had got several threats for her activism against the Pakistani government.
Meanwhile, dozens of demonstrators made calls for justice outside the Canadian Embassy in Washington DC on Tuesday afternoon and demanded a formal investigation into the death of Karima.
Karima, a prominent Baloch voice, went missing last Sunday and her body was found a day later in Toronto.
The Baloch activists' death has also sparked protests across Europe and North America as the Baloch diaspora took to the streets in Toronto, Berlin and Netherlands calling on the Canadian government to investigate.
Baloch had campaigned vigorously against the disappearances and human rights violations in the troubled Balochistan province of Pakistan.
Requesting the United Nations to intervene, Baloch Human Rights Council (BHRC) in a letter has said Pakistan has "responded violently to the genuine demands of the Baloch people".
In a letter to UN Secretary-General Antonio Guterres, Naseer Dashti, BHRC executive president, wrote, "Her family and political friends believe that Pakistani secret agencies are involved in the death of Karima Mehrab and have rejected the initial report of the Toronto police." (ANI)