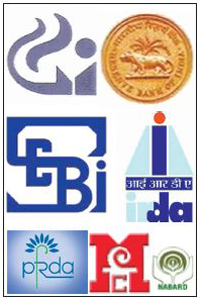 India took to this age with enthusiasm. The government had the problem, that it retired its servants at the ripe young age of 58; just when they became mature and could deliver their best for another two decades, the government had to start paying them for doing nothing. They felt bad about being put to turf in their prime; the government too fell in love with some of them and hated to part with them. Regulatory institutions met the needs of both; they enabled the government to retain the services of their favourites, and the favourites to enjoy the loaves and fishes of power for some more years. No surprise, therefore, that there was an epidemic of regulators. Many of them do not have a decent office; some do not even have staff. But none of them lacks salaries and perks.

Thus in finance there are six regulators — the Reserve Bank of India for banks, Forward Markets Commission for futures markets, Securities and Exchange Board of India for equity markets, Provident Fund Regulatory and Development Authority of India for pensions, National Bank for Agricultural Regulation and Development for rural financial institutions, and Insurance Regulatory Development Authority for insurance. With such reckless fracturing of responsibility, there are bound to be territorial disputes. The last one was on unit-linked insurance policies, which Sebi sought to discipline to the ire of Irda. The dispute was settled in Sebi's favour by the ministry of finance. But its partiality caused heartburn, so it appointed a new super-regulator for future conflicts.

Six regulators for just finance are surely too many. The cost of such proliferation is mostly financial; the taxpayer pays for that many more clerks and members and offices. The potential for conflict is there; but it erupts seldom. Most of the regulators, especially the smaller ones, are happy with their cushy jobs and refrain from creating more work for themselves by actually regulating anything. But there is one serious consequence of regulatory proliferation which is ignored in this country: that it makes expansion of firms across industry boundaries difficult. Banks venturing into insurance have already run into trouble with the Reserve Bank of India; and it would not even dream of letting insurance companies into banking.

Inter-industry investments are being prevented even where they would make good technological sense and intensify competition. An instance is electric power and telecommunications. Power companies have vast transmission networks which carry high-voltage current; for them it would be child's play to carry low-voltage telephonic messages. There is no competition in power generation; the only way it can be introduced is by entry of new firms. But regulatory segregation is so strict that a telecommunications firm could never invest in the power industry. Airtel has huge investible funds, and goes round the world looking for somewhere to invest. If it were allowed, it would set up a highly efficient power network; it would give farmers as reliable and abundant power as it gives them teleconnectivity. But there is no chance that the government would let it invest in power. The gain is of inefficient government power generators; the loss is the people's.