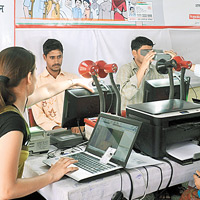 "It has been decided to make Aadhaar numbers mandatory for new members...joining on or after March 1, 2013. However for existing members, the seeding of Aadhaar number has to done in a time bound manner," an official order to the field staff said.

In case any employees does not have issued the Aadhaar number, the employer can issue an Enrolment Id (EID) as per the guidelines of the body. This EID would be converted into Aadhaar number later on, the order said.

The body would also seek the Aadhaar numbers of its pensioners through the banks. EPFO has decided to use Aadhaar as mandatory KYC credential for to improve its services.

The pensioner can submit their Aadhaar number either to their pension paying branch of the bank or to the EPFO office.

Earlier, EPFO had envisaged to replace its members account number with the Aadhaar numbers to avoid inconvenience of members as they had to apply for transfer of PF money to his new account with the new employer.

EPFO is working on to create a central data base where all members would have a unique account number and would not require to transfer PF accounts to another one on changing job.

Besides, this will help EPFO members, particulary the construction workers, who often change their jobs or contractors.