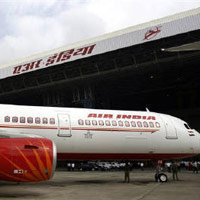 08 November, 2014
Print this article Font size -16+
Air India would lower the free baggage allowance from 20 to 15 kgs on the domestic sector and start charging a flat rate of about Rs 200-250 per kilo on excess baggage from next week, airline sources said Monday.

Air India passengers would from next week be allowed to carry only 15 kgs of free check-in baggage and pay a flat rate of about Rs 200-250 per kg on excess weight, the sources said.

The excess baggage charges currently vary between Rs 150-400 per kg depending upon the sector.

There would be no charge for hand baggage up to seven kgs, they said, adding that registered frequent flyers would be allowed to carry up to 20 kgs of checked in baggage as is prevalent now.

The national carrier is also contemplating levying charges for preferred seats but no decision has been arrived at as yet, they said, adding, there would be no charge on this count for business class passengers.

The business class passenger is in any case allowed to carry 30 kgs of baggage free.

Air India would also shortly take a decision on whether and how much to charge for meals on board, which is offered free currently as part of the full-service carrier's services.

There would no change in the rules for international flights, the sources said.

While no-frill carriers IndiGo and SpiceJet charge for preferential seating and food on board, Jet Airways was also considering going in for the same. But no formal decision has been announced so far.

Air India is making changes in its ticket booking software to make the passenger know their free baggage allowance as also the excess baggage charges and other such fees which are yet to be decided, the sources said.

Air Passengers' Association of India and travel agents' bodies have opposed the government's decision to unbundle these services and levy extra charges for them.