ADB To Provide $6 Billion To India 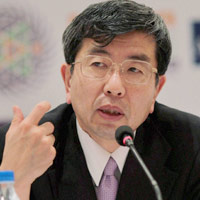 08 November, 2014
Print this article Font size -16+
India will get loan of about $6 billion from the Asian Development Bank (ADB) over the next three years for various projects, including those in energy and education sectors.
"Our idea is ADB will maintain its lending level to India, approximately $2 billion over next three years. We are now working on the country partnership strategy and we are planning to maintain the level of lending to India," ADB President Takehiko Nakao said at the concluding day of the 46th annual meeting of the funding agency in the north Indian city Greater Noida.

India is the biggest borrower of ADB as the Manila-based multilateral lender had extended $2.4 billion loan to it in 2012 across sectors like transport, energy, commerce and industry, trade, finance, agriculture and natural resource management and it will like to continue extending assistance in these sectors.

Nakao said that the bank will continue to lend $10 billion a year across the member-nations despite generating lower return from investments.

Stating that ADB is facing a resource challenge, he said this issue will require urgent and careful attention. "We will look at all options for ensuring that our lending level remains adequate."

Actively investing in different kinds of assets can be one of the options for larger revenue, he said, adding that "financial safety and return is the key objective while making investment".

Asked whether there was discussion on augmenting the capital of the bank at the Board of Governors meeting, Nakao said: "That is a very difficult issue. At this point I want to mention what kind of objections we are getting to maintain the level of lending. I don't want to specify what kind of idea we have at this moment."

ADB's capital was tripled in 2009. The fund enhancement came after a gap of 15 years.

On economic growth in Asia, Nakao said the region is recovering from the slowdown caused by the global meltdown.

"I think growth momentum is strong, supported by strong domestic demand, consumption and production capacity of the region. So, Asia is becoming more and more the consuming Asia, or factory Asia. So, I have a very positive view of Asia and the future of Asia," he said.

With regards to quantitative easing being carried out by developed nations, he said it is needed for supporting growth in these countries which have been facing slowdown.

He, however, cautioned countries against spillover effects which could be in the form of asset price bubble or overheating (of the economy).

"If there is a problem, countries, of course, have the ability to manage it through micro economic or macro prudential measures," he said.