AAP Vs LG: Setback For Kejriwal As Centre Steps In 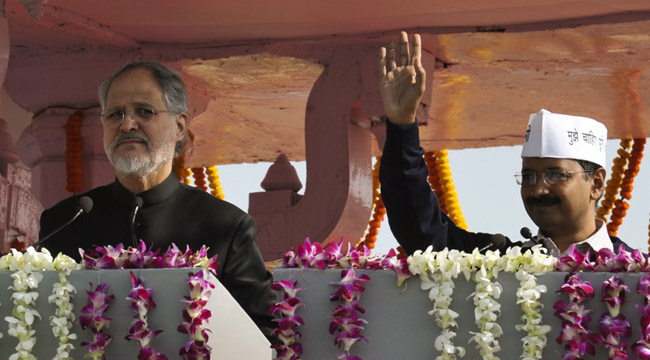 08 June, 2015
Print this article Font size -16+
Amid the escalating Chief Minister Arvind Kejriwal led Aam Aadmi Party (AAP) government’s feud with LG, the Centre on Friday (22 May) backed Delhi Lieutenant Governor Najeeb Jung making it clear that it was not mandatory for him to consult Chief Minister Arvind Kejriwal on matters like appointment of bureaucrats.
In a gazette notification issued today (22 May), the Union Home Ministry said that the Delhi LG will have jurisdiction over matters connected with services, public order, police and land and he may consult with the Chief Minister Arvind Kejriwal’s AAP led Delhi government whenever he thinks necessary in issues of services using his own “discretion”.
It is well established that where there is no legislative power, there is no executive power since executive power is co-extensive within legislative power, it said.
“Public order, police, land and services fall outside purview of legislative assembly of the National Capital Territory of Delhi and consequently the Government of NCT of Delhi will have no executive power” on such matters, accordingly to the notification.
The gazette notification said the LG shall in respect of matter connected with public order, police, land and services exercise the powers and discharge the functions of the central government to the extent delegated to him from time to time by President provided that the LG may in his discretion obtain view of the Chief Minister of Delhi in regard to the matter of “services” wherein he deems it appropriate.
It also said that the Anti-Corruption Branch police station shall not take cognisance of offences against officials, employees and functionaries of these central government services. This will supersede a 1998 notification.
The appointment of senior bureaucrat Shakuntala Gamlin as acting Chief Secretary by LG last week had triggered a full-blown war between the ruling AAP and the Lt Governor, with Kejriwal questioning the LG’s authority and accusing him of trying to take over the administration.
Kejriwal had also sought the intervention of Prime Minister Narendra Modi in the matter even as he accused the Centre of using Jung to run Delhi.
The gazette notification said the Union Territory cadre consisting of IAS, IPS service personnel is common to Union Territories of Delhi, Chandigarh, Andaman and Nicobar islands, Lakshadweep, Daman and Diu, Dadra and Nagar Haveli, Puducherry and states of Arunachal Pradesh, Goa and Mizoram which is administered by central government through the Ministry of Home Affairs.
Similarly, DANICS and DANIPS officers are common services calling to the requirement of the Union Territories of Daman and Diu, Dadra and Nagar Haveli, Andaman and Nicobar islands, Lakshadweep and NCT of Delhi which is also administered by the central government through the Ministry of Home Affairs.
“As such it is clear that the NCT of Delhi does not have its own state public services, thus ‘services’ will fall within this category,” the notification said quoting Article 239 and 239AA of the Constitution.