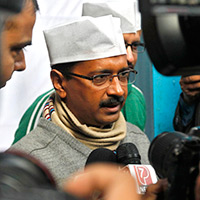 08 November, 2014
Print this article Font size -16+
A day after Arvind Kejriwal stepped down as Delhi Chief Minister, Aam Aadmi Party on Saturday (15 February) made it clear that it would contest the Lok Sabha polls under his leadership.

Kerjriwal on Friday (14 February) resigned as Delhi Chief Minister shortly after his government was defeated on the issue of tabling of the Jan Lokpal Bill in Delhi Assembly in the face of a united resistance by outside supporter Congress and BJP.

Congress and Opposition BJP said Kejriwal was never serious about governing and was looking for an excuse to "run away" to cover up his "failure" to deliver on his commitments.

The BJP also made it clear that the party would seek fresh elections in Delhi and was ready for it rather than form an alternative government since it did not have the required numbers in the state Assembly.