New Delhi [India], November 1 (ANI): Dairy brand Amul on Sunday paid tribute to the late 'James Bond' star Sean Connery who passed away on Saturday at the age of 90.
Amul shared the new cartoon featuring its signature mascot along with the late actor in a monochromatic post to Twitter this evening.
The doodle features Connery in the '007 James Bond' avatar as he fires a shot out of the revolver, as the Amul mascot stands at the back while holding a diamond. It also features a huge diamond on the right of Connery, with the classic 007 logo. 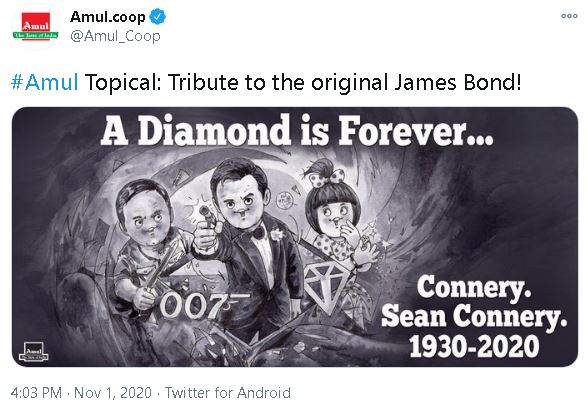 In reference to the seventh film starring Connery as Bond titled 'Diamonds Are Forever' the doodle was dubbed as, "A Diamond is Forever'.
And in sync to the popular dialogue, "Bond James Bond' from the much-loved spy-thriller of the franchise, they noted, " Connery.Sean Connery. (1930-2020."
"#Amul Topical: Tribute to the original James Bond!" Amul wrote on Twitter with the cartoon.
The Scottish-born actor was an audience favourite for more than 40 years and one of the screen's most reliable and distinctive leading men. Once pigeonholed as Ian Fleming's sexy Agent 007, he went on to distinguish himself with a long and mature career in such films as 'The Wind and the Lion,' 'The Man Who Would Be King' and 'Indiana Jones and the Last Crusade,' Variety reported.
The actor's remarkable role as a tough Irish cop in Depression-era Chicago in Brian De Palma's 1987 'The Untouchables' won him a supporting actor Oscar.
Even as he entered his seventh decade, Connery's star power remained so strong that he was constantly in demand and handsomely remunerated (ANI).