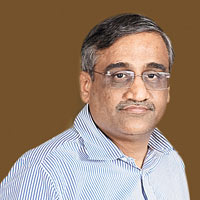 08 November, 2014
Print this article Font size -16+
The Future Group is having quiet an eventful year in making itself a debt- free company; it sold Future Capital Holdings to Warburg Pincus for a majority stake, it also made a similar deal with the Aditya Birla Group when it sold its ‘Pantaloon’ lifestyle property and also managed a private placement with an investor. It managed to take off Rs 6,300 crore of debt, leaving Rs 1,400 crore of debt on the books of its listed entity Pantaloon Retail India Limited. In order to make the business debt-free, the group has demerged five fashion businesses from PRIL.

Also the group demerged five fashion businesses and three fashion investments which were part of another listed entity, Future Ventures India Ltd. By doing so, a debt of Rs 1,200 crore was taken away from PRIL and moved to the unlisted entity. Kishore Biyani had earlier suggested that he would make Future Group a zero-debt company by the end of the year.

“This consolidation will help create the base for the next phase of growth of the Future Group in modern retail. We grew multiple formats in the early stages of our growth, and now as each one of them has become sizeable, we are giving them independence to propel their growth,” says Kishore Biyani, Chairman of the Future Group in a press release He added that this was in continuation with the business realignment exercise that the group embarked on last year.

“We have already exited our financial services business, and unlocked shareholder value through the demerger and partnership of our Pantaloons format,” he said. He added that this consolidation will now further unlock value for our shareholders and give them shares in independent attractive businesses”.

Further, FVIL will acquire businesses of some of its subsidiaries by way of merger and demerger and will emerge as an operating company. It will cease to be an NBFC. As a consequence of the demerger of the fashion business, it will also reorganise its share capital to change the face value of its shares from Rs 10 to Rs 6. FVIL will be a company focused on the Food & FMCG sector with a portfolio of FMCG brands, its own rural distribution chain, Aadhar and convenience store chains, KB’s Fairprice & Big Apple.

Future Fashion will house brands such as Central and Brand Factory, both of which generate close to Rs 2,300 crore of revenues. Kishore Biyani is bullish on Central and expects it to generate more than Rs 3,000 crore revenue in the financial year 2012-13. Biyani now plans to open smaller formats of Central that will compete directly with Shoppers Stop, Westside, Lifestyle and the like. Vishnu Prasad, who is the CEO of Brand Factory and Central had earlier told BW that these two formats were the fastest growing formats in the retail industry.

“We have data of over 5 million customers that come to Central every year and it has helped us target them better,” says Vishnu Prasad. Biyani’s other businesses such as Indus League, which he acquired in 2005, has grown to over 100 stores. Its CEO Rachna Agarwal has plans to expand 9 brands within the portfolio in to smaller towns such as Madurai, Jhansi, Kota and Cuttack. “We are planning to expand on the franchise route in the coming years,” says Rachna Agarwal. These formats make Future Fashion a formidable lifestyle player with close to 200 stores directly under the control of the Future Group and indirectly its brands would reach 150 odd stores of other retailers.

The original entity, PRIL, will not be a lame duck. It will have the largest businesses, Big Bazaar and Food Bazaar which contributed half of its Rs 14000 crore revenue last financial year. Two years ago Kishore Biyani had told BW that he was looking at various accounting options to reduce the debt. By focusing on retail he has announced his comeback.