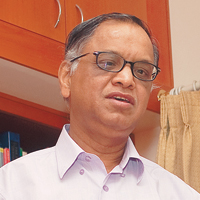 N.R. Narayana Murthy, chairman and chief mentor of Infosys Technologies, is donning a new hat, that of a venture capitalist. Murthy has sold 800,000 shares in Infosys to raise $37 million (Rs 170 crore) to set up a venture capital (VC) fund, Catamaran. Speaking to reporters on phone from the US, Murthy said his fund would encourage entrepreneurship and give a fillip to bright ideas. "The best way to eradicate poverty is by creating more jobs. And entrepreneurship is the ideal catalyst to help create more jobs in the society."

Murthy hasn't appointed anyone as yet; he is in the process of building a team of top talent to manage his VC fund. Murthy says he is the sole investor in Catamaran, which will look at interesting opportunities across all sectors and verticals. The fund is expected to get activated in the next few months. The fund will be largely India-focused, and would look at early stage funding.

Murthy is not the first of his ilk to use personal wealth to fund entrepreneurship in the country. In 2000, N.S. Raghavan, who founded Infosys along with Murthy, left the firm to set up Nadathur Holdings and Investments, which has so far invested in 17 companies. In 2006, Wipro Chairman Azim Premji, too, started a fund called PremjiInvest, with a corpus of $1 billion.