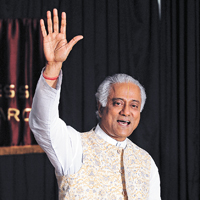 
Arun Madhavan, MNC banker turned theologian
A brahmin by birth, educated in a jesuit institution and having childhood friends from the Islamic faith, Arun Madhavan "was brought up in an inclusive atmosphere, one which understood that Indian faith and culture had a deep scientific process embedded within".

Fifteen years ago, this banker with Standard Chartered decided to call it quits to pursue several causes for the larger good — from tribal empowerment to promoting Ayurveda to a mobile institute for organic farming. Then 47, Madhavan had a great career going for him, but he chose the path of spirituality. "If your wife sides with you, half the battle is won," he says.

Post-StanChart, Madhavan had two options. One was to become chairperson of the Vyakti Vikas Kendra and the other was to help in setting up Sankara Nethralaya, an eye hospital chain in south India. As the first chairman and trustee of the Vyakti Vikas Kendra, Madhavan was soon to be known as Arunji and the organisation that he mentored is now popular as the Art Of Living Foundation.

Currently, Madhavan also serves on the ethics committee for Pharma Drug Protocols, continues to explore the science of management using lessons of Yogi Vasishta from the Ramayana and composes soul stirring bhajans.

M.K. Ramanujam, motivational speaker and former general manager of Visteon
In 1992, barely six months into his first job with TVS Whirlpool, M.K. Ramanujam started feeling he had got all he ever wanted. The gold medallist in electrical engineering from Delhi University explains: "I came from a frugal background. I did not have any hedonistic pleasures that I could pursue with the money from a well-paying job."

Nevertheless, he continued with his corporate career. By his early 30s, he was the general manager at Visteon India, an auto components division it was owned by Ford, with a Six-Sigma black belt among his achievements.

In 2006, in the quest for superior quality of a different kind — the quality of inner life — Ramanujam decided to bid goodbye to the corporate world to delve deeper and give discourses of religious texts such as Srimad Bhagavatham, the last of the 18 puranas that is considered by many to contain the distilled essence of ancient wisdom.

But this did not mean that Ramanujam's corporate experience would go waste. With the experience he had gathered in supplier training, particularly during his stint with Visteon, Ramanujam began developing training modules around happiness at work, conflict management, transformational leadership, statistical thinking, and so on. The revenues from these workshops help his trust, Global Organisation for Divinity, undertake social initiatives such as  education for the underprivileged in rural India.

Gurcharan Das, former MD of Procter & Gamble and author of The Difficulty of Being Good
He claims to be only doing what everybody does during the "Vanaprastha melancholy" (an individual's transition from a material to a spiritual life between 50-74 years of age). But what provoked him into writing The Difficulty of Being Good was that as prosperity was spreading across India, so was corruption. "As India is rising, moral values are corroding rapidly because of an incompetent, corrupt state," he says. "The economy would grow and prosperity would spread. But there will be no happiness till we fix governance." The result was a book that, according to him, is one man's search for dharma in a world of conflict.

According to Das, there are answers for corporate governance standards — the dharma of a director — in the Mahabharats. "Greed is the sin of capitalism and envy is the sin of socialism. People desire equality, not of opportunity, but of result," he says.

Das's book, which is based on the principles of good moral reasoning and the role of dharma, has already sold more than 37,000 copies in the hardback version (Rs 700). His first book, India Unbound, which examined the aim of artha (material well being), sold 50,000 copies in four years. Hopefully, his next two books will focus on kama and moksha.

Amish Tripathi, head, marketing and product management, IDBI Federal; and author of The Immortals of Meluha
"There were times when i was an extreme atheist and times when I was agnostic," says Amish Tripathi, who comes from a family that was traditional and religious. But Tripathi was firm in his belief that religion was the cause of stress and conflict.

"My father used to tell me that there is no such thing as good and evil. Choice is in what we see. Fire can be used to cook, but it can also burn." On that count he found more examples. "Do we confuse someone who is different than us as evil?" These thoughts started taking the shape of a book on philosophy. Unsure if anybody would be willing to read philosophy, the book started changing character into an adventure thriller. "If it was a story on evil versus good, the hero had to be Lord Shiva, the destroyer of evil," he says.

What emerged was the first of a trilogy on Shiva called The Immortals Of Meluha, a book that was five years in the making. With about 40,000 copies sold within 14 weeks of launch, Tripathi, according to some, is well on his way to become the Paulo Coelho of the east.

Adarsh Gupta, former CEO, Times Music, and founder, Times Wellness
once during his college days, while hitching a ride with a stranger, Gupta was advised by the stranger to do what was close to his heart. A career in music was what Gupta wanted.

Eventually, he started off a career in FMCG but found his way into music. It was at Times Music that Gupta started incubating the idea of giving back to society by setting up a wellness factory that would spread the message of spirituality through workshops, videos and even mobile downloads.

One such initiative saw the launch of a DVD titled ‘Who the Hell thought of this concept called marriage?' where surgeon and motivational speaker Shantanu Nagarkatti as the protagonist counsels warring couples.

The thought behind the business division, Times Wellness, was simple. "At a fundamental level, corporations behave like humans where every employee works on a different agenda not aligned to an organisation's objectives. With spiritual awareness, they become aligned," says Gupta.  Talk about marrying spirituality with a strong business idea.