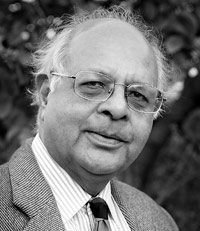 08 November, 2014
Print this article Font size -16+
Srikrishna has pronounced: Ad interim for now, but nevertheless radically. Justice B.N. Srikrishna has chaired many commissions. The most famous of them was the one on Bombay riots of 1992.

Soon after he started work, elections brought Shiv Sena to power in Maharashtra. It did not like the idea of its own activities during the riots being exposed by a judge; so it disbanded the commission. It continued and completed its work nevertheless; the Maharashtra government ignored its recommendations. He enquired into the lawyers’ riot in Madras High Court in 2009; his report was buried by the Supreme Court. The following year, he chaired a committee on Telangana; following the precedents of Maharashtra and Tamil Nadu, the central government is still sitting on the report. These reports are smothered in red tape; I am now talking about Srikrishna’s latest commission, called Financial Sector Legislative Reforms Commission, announced by the finance minister in his 2011 budget speech. He appointed it on 24 March 2011, and asked it to submit its findings in 24 months; it submitted them on 23 March 2013. In two years, it has collected and reviewed the voluminous financial laws, and worked out a blueprint for simplifying and harmonising them.
Its prime recommendation is that the Pension Funds Regulatory and Development Authority, the Insurance Regulatory and Development Authority and the Forward Markets Commission should be wound up and merged into the Securities and Exchange Board of India. This is eminently reasonable. The regulators for pension funds and insurance have had little work except to give and renew licences; that does not require big offices in the heartland of Bombay. And forward markets are an integral part of the capital market; separating their regulation is counterproductive and stores up problems of regulatory conflict. But these redundant regulators employ hundreds of babus; what will they do if they are robbed of their jobs? That is only part of the problem. The government is generous at the taxpayer’s expense, and may continue to pay them for worklessness; but they will miss the patronage. One of the retired SEBI employees was noticed taking a flight with family to the Far East at the cost of someone he once regulated; there must be many more unnoticed regulators living it up.
And if the commission wants to pare financial regulators, why have two? Why not merge Reserve Bank with SEBI? I am not saying that SEBI should take over Reserve Bank; even I would not indulge in such lese majesté. But the Reserve Bank has a vast imposing palace in Bombay, filled with extremely industrious bureaucrats. They love power, and by and large, they are generally better at exercising it than the denizens of North Block. The FSLRC’s reluctance to hand over SEBI to them suggests an inexplicable prejudice or a preference. Admittedly, the Reserve Bank has its detractors, whom I join sometimes for fun. The Reserve Bank loves power, it makes detailed and vexatious regulations, it is fond of government and suspicious of the private sector, and it is extremely risk-averse. But that is an argument for reforming the Reserve Bank, not one for denying it power.
Maybe the FSLRC thought Reserve Bank could not be reformed; so it is thinking of another solution, namely creating a regulator to tame the Reserve Bank. The central government has had a financial stability and development council since 2010. It was created to give the finance minister a handle on all financial regulators. But hitherto it has been only a committee for tea and biscuits. It meets once or twice a year, the finance minister gives the chiefs of financial regulatory institutions a chance to say their piece, and then he finishes with a homily on the importance of stability and development.
The finance minister is a brilliant man, but he is not the right super-regulator. The FSLRC proposes that the FSDC should acquire a secretariat, which can then coordinate and discipline the other regulators. That is not a bad idea, but the FSLRC’s bonfire of current legislation must come first.