A Place Of Illusions 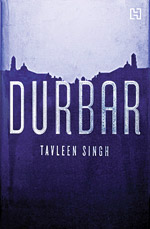 08 November, 2014
Print this article Font size -16+
Journalism, it is said, is history in hurry. So when veteran scribes sit down to take stock and scribble down their version of events — epochal, calamitous — they have covered or been part of, it is natural for them to lose focus. It takes vision to be steady with the notes and go beyond the obvious to add value. That is a delicate balancing act the veterans of yore such as Frank Moraes, Pothan Joseph, Edathatta Narayanan or C.P. Ramachandran were masters of. But yes, things have changed over time. Today, most often, what matters is how you write about things rather than what. And Tavleen Singh belongs to a new breed of chronologists. Her new book Durbar is a back-of-the-book account of the capital city and the people who mattered — the bold, the sold, the old and the beautiful.

Like most of the people Singh profiles, her prose is also impeccable and shiny. The book, which has two parts, is well-structured with a stunning cover. Singh writes with authority and ease, but there is a designed humility to her ways; she never makes it a big thing of the fact that she was always mingling with the high and mighty and even admits she was fairly ignorant of the key issues that dogged this part of the world. But upon finishing the book, one realises that her hectic life as an important journalist-socialite has not given her much time to work on that. Like all her upper-middle class friends, she knows for sure that politics in this country is obnoxious and politicians scoff-worthy at best. Even more contemptuous are the “ordinary people” who are destined to be there only to worship the feudal, “white” men and women that they vote every polls to rule them over. Singh stops short of asking the uncomfortable questions. Yes, she criticises, laments and laughs at transgression. She tells you the Congress has always been run by sycophants and their inept masters. And she seems to have taken it all for granted.

That said, the book is a must read for journalism students and politicians alike. Its plot, which starts with the political Emergency of June 1975 and ends with the assassination of Rajiv Gandhi in May 1991, is wide and colourful enough to keep the reader engaged. Singh has, as is well known, a keen eye for detail; and in some cases she wears a pair of magnifying glasses too, such as when describing a young Sonia Gandhi or those ravishing people at Delhi parties, presenting us with a riot of trivia. Even though she tries to strike disenchantment when writing about important events in India’s recent history — be it the Emergency or the Sikh massacre that followed Indira Gandhi’s assassination by her own body guards in 1984 or the Bofors arms deal — Singh at times becomes an emotional participant rather than an observer. Those judgement-laden one-liners bring in uncomfortable pauses in this otherwise smooth read.